I spent last weekend at New York Comic-Con. As I walked around the show floor looking at everything for sale my mind wandered to my other avid interest. Despite the stereotype of the typical Comic-Con attendee as some unwashed misanthrope; as I was pressed way too close to many people I caught trails of many of the more popular fragrances out there. Which got me wondering why there is no niche perfume inspired by the numerous sci-fi sources out there.

There are the cheap knockoffs as both Star Wars and Star Trek perfumes based on characters from the perfumes. I know that a perfume named Jedi shouldn’t smell of waterlily. Furthermore, a fragrance called Shirtless Kirk should swagger instead of be a pedestrian woody citrus. Both of these are real releases from the brands Star Wars Perfumes and Genki Wear. They count but they really don’t because these have the same craftsmanship as a typical Axe body spray. So why hasn’t one of the creative minds behind perfume taken a sci-fi movie or book and turn it into a brief. 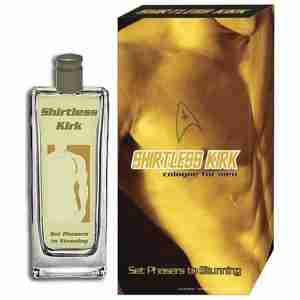 Can't We Do Better?

The answer might be simple as the rights fees are unavailable or exorbitant. If that is the case, then it makes sense. For the purposes of this though I am going to assume that you could get the permission and propose some of my favorite sci-fi sources I think could provide a place to start.

I’ll start with a book which has always had its own internal scent track as I read it: Dune by Frank Herbert. If a story where the struggle over a substance called spice is not a natural. The reliance on water on a desert planet matched with the rubber of the suits could provide something fascinating like a cross between Bvlgari Black and Viktor & Rolf Spicebomb.

The material called “ice-nine” from Kurt Vonnegut’s novel Cat’s Cradle is another thing which I smell in my imagination. Ice-nine is a form of water which can immediately freeze water around it. Whenever I smell the perfumes which give off an icy quality I wonder what it would be like if a perfumer really went for broke with a perfume which would freeze my sinuses.

The world brought to life in The Matrix movies also feels like it could inspire a fragrance of circuits juxtaposed with animalic facets.

What about an Inception perfume with layers within layers?

For a really weird inspiration I point towards Robert Sheckley’s novel Crompton Divided where the protagonist has become the premiere composer of “psychosmells”. Perfume which strums the pleasure centers.

I am by no means a creative director but I want someone who is or an independent perfumer to take up my challenge and find a piece of sci-fi which you can make into a great perfume. Give me something to wear to next year’s Comic-Con.