When there are perfume brands as prolific as Xerjoff it is an unfortunate by-product that something will get lost in the ever evolving shuffle of new product. Back at the beginning of 2013 owner and creative director of Xerjoff, Sergio Momo, introduced his third collection underneath the Xerjoff umbrella. It was called Sospiro and debuted with six new fragrances. When I tried them there were two in that initial collection I really liked; Duetto and Laylati. There would be nine more releases over the next year or so and then, at least in the US, they sort of dropped out of sight. Fell completely off of the radar screen. In the crush of new product it is hard for large collections to make an impression which is what Sospiro suffered from. It really deserved a better fate than diffident dissolution. When I ran into Sig. Momo at Pitti Fragranze he feels the same way and therefore the entire 15-fragrance line is being re-introduced into the US market. Because it was sort of ignored the first time around I thought I would pick one of my favorites from the entire line Wardasina as it returns to the perfumed radar screens.

Wardasina was one of the earliest follow-ups to the original collection. The signature of the Sospiro collection was a tendency to go for the deeper darker notes and accords. It makes for perfumes which carry more than a little power. These are not introverts by any means. Wardasina hews to this philosophy by using tobacco, rose, and patchouli to form a narcotic floral fragrance. 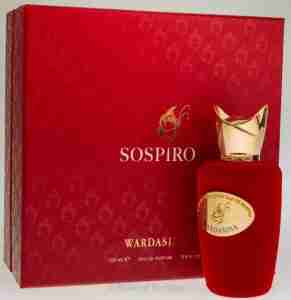 Wardasina opens with saffron and rose performing an intricate dance. The rose is a classic spicy rose which the saffron accentuates. The early moments carry the only bit of delicacy you will encounter while wearing Wardasina. That’s because hard on its heels comes a heady tobacco followed by an earthy patchouli. In many other fragrances those notes would easily muscle out the saffron. For quite a few hours the saffron manages to stand up to the bigger notes on display. It particularly finds an interesting place to land between the richer aspects of tobacco and the spicy core of the rose. The patchouli literally grounds everything in a dark earthiness. Very much later a bit of cedar and vanilla become more apparent.

Wardasina has 24 hour longevity and above average sillage.

Wardasina also fits in with the rest of the Sospiro collection because it is on its surface a simple construction of a few notes. What sets it apart is those few notes linger supernaturally long making a lasting impression. The Sospiros should become widely available again towards the end of October 2015. If you missed them the first time around give them a second try there are some good perfumes to be found here, Under the Radar.

Disclosure: this review was based on a sample provided by Xerjoff.