As a perfume collection matures over the years it tends to swing back and forth like a pendulum. The Tom Ford Private Blend Collection has been around since 2007, under the creative direction of Tom Ford and Karen Khoury. Most of the early fragrances had an intensity to them and that depth is what drew me to the line in the first place. Noir de Noir’s mix of chocolate, rose, oud, and patchouli is a good example. In 2010, things lightened up a bit and Jasmin Rouge is a good example of where the pendulum had swung to as the jasmine was kept cleaner and the notes surrounding it were kept in check. That kind of restraint added a sense of ephemeral beauty to those that I came to appreciate very much. But, but, but I wanted another Private Blend which swaggered with audacity. Little did I know it had been released last September. 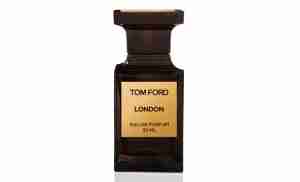 Tom Ford Private Blend London was an exclusive to the new Sloane Square Tom Ford boutique which opened in 2013 in London. There was little enthusiasm for it among the London contingent of perfumistas and as a result without an attendant buzz I had a very difficult time getting a sample. I did finally get one from online decanting site Surrender to Chance. What I was greeted with was a fragrance which seemed to encompass something more than trying to assay London as a fragrance. This was a fragrance of the East; exotic spices, opulent florals, and deep woods. This was the London of the Royal Geographic Society as their members brought back things seen for the first time from all over the globe. In a wood paneled drawing room, furnished in leather, one explorer shows off the cinnamon and cardamom he acquired. On another table a species of jasmine from the Himalayas scented the room. Raw vanilla pods from the West Indies mixed with these very intense smelling oud wood chips from Egypt smoking in a censer. This is the smell of Tom Ford Private Blend London.

Perfumer Yann Vasnier opens London up with a spicy mélange centered on cinnamon but heavily influenced with cardamom, ginger, and black pepper. This captured my attention immediately as M. Vasnier swirls all of this up into a spicy sirocco which blows with an airy potency. The jasmine in the heart is full on indolic jasmine and it has to be to make any headway against the spices. This skanky jasmine fits in perfectly with the spices and it is heady stuff. It gets even deeper as oud over leather makes up the key notes of the base. It is sweetened with a bit of vanilla and amber but this is drawing room leather and oud mostly.

London has 10-12 hour longevity and above average sillage.

My wish has been answered as London feels like it belongs to the original collection more than the more recent releases. It seems appropriate if London is the signal that the pendulum is swinging back because y’know; London swings like the pendulum do.

Disclosure: This review was based on a sample purchased form Surrender to Chance

Editor’s note: I expect London will be available worldwide sooner than later as the previous exclusive fragrance to a boutique, Lavender Palm, became widely available about a year later. As of this writing it is still only available in London.