In the morning I take the dogs out the back gate onto a path through a forest of birch trees. One of the ways I mark the transition from summer to fall is the smell of woodsmoke on that walk. As the mornings gain a little chill there are a set of houses in the distance which fire up their wood stoves. The sunlight slices through the haze. I have a perfume which captures this perfectly; Naomi Goodsir Parfums Bois d’Ascese. 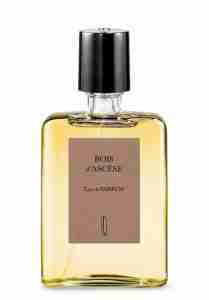 Bois d’Ascese was one of the first two releases by Australian hatmaker Naomi Goodsir in 2012. Along with co-creative director Renaud Coutaudier they collaborated with perfumer Julien Rasquinet. Ever since then the brand has released three more fragrances. Every one of them have been among the best perfumes the year they were released. Because they are a brand which releases perfume infrequently it is easy for them to fall off the radar. To put them on your radar I will let Bois d’Ascese introduce you to it, as it did me.

When talking to Ms. Goodsir and M. Coutaudier they have an uncompromising vision which they will take their time to realize. M. Rasquinet was early in his career and was just beginning to show his skills off. Bois d’Ascese exemplifies this because they use one of the most common ingredients, cade oil, as the smoky component. I’ve smelled way too many smoky perfumes where the cade oil turns into choking billowing clouds of smoke. This creative team takes that same ingredient to a lighter place where it is that morning woodsmoke haze I recognize.

The way the cade oil is given that effect is through a precise amount of incense. It gives a foundation for the cade oil to not have to carry all the weight of a woodsmoke accord. That keeps it with a consistently strong but not overpowering presence. The woods come into focus through oakmoss, tobacco, and labdanum. This is the smell of birch trees on an autumn morning.

Bois d’Ascese is one of my favorite smoky perfumes I own. It has engaged me ever since I tried it eight years ago. If you like smoky perfumes it should be on your radar. Naomi Goodsir Parfums should be there because this is the epitome of what independent perfumery can be.