Montale has released 100 fragrances over the last 16 years. There are so many entries on the Montale radar screen a poor perfume traffic controller has to work hard to pick out the ones which need some attention. As I mentioned when I did my Perfume 101 on Montale the brand was one of the first to bring oud to the West. There are many great oud perfumes in the collection but my favorite is not one of those it is one of the best amber perfumes I own, Blue Amber. 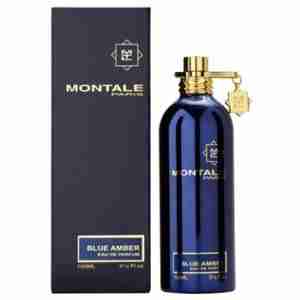 As Montale really began to rev themselves up starting in 2008 there were three out of that voluminous early set of releases which stood out; Black Aoud, Red Vetyver, and Blue Amber. They all still hold up over time but the first two have more notoriety and Blue Amber has lost some altitude.

Until the release of last year’s So Amber, Blue Amber was the only amber perfume in the collection. I’ve always thought when you nail it on the first try there was no need to take another try. Pierre Montale succeeded because he chose a near-perfect set of notes to complement the amber at the heart of this perfume.

Blue Amber opens with one of my favorite geranium uses in any fragrance. There is one thing M. Montale does not traffic in and that is subtlety. As a result, there is a whopping amount of geranium in the top of Blue Amber. To this he adds an equally potent amount of coriander which accentuates the green facets of the geranium which are more apparent because of the concentration. Then the amber arrives in a spicy wave picking up on the coriander. Patchouli and vetiver provide a fantastic foundation for this amber to react to. It all comes together rather quickly and lingers there for hours.

Blue Amber has 18-24 hour longevity and above average sillage.

There are times I want a perfumer to go all out. With Blue Amber M. Montale does exactly that. The hazard is at that volume flaws are much more apparent. The upside is if it is done well that kind of power carries a rough beauty hard to find in fragrance. Blue Amber is that kind of fragrance and deserves to be on your radar screen.