As we enter the final mad dash of parties, lunches, and shopping which mark the final sprint to Christmas it is hard to catch a breath. Not that I really want to but there always comes a moment where all of the madness pauses before gathering speed again headed for the New Year. For me that happens late on Christmas Eve. The prep for the next day’s big meal is done. Everything has quieted down as Mrs. C and the poodle snuggle in warm as we can be. The lights are twinkling on the tree as the ornaments catch the reflection of the fireplace. The house smells of fruit as the pies are cooling. Usually at this point I treat myself to a drink most often cognac. I lean back taking all of this in and breathe deep with satisfaction; while scratching a poodle ear. Two years ago, I discovered a perfume which captures the scent of this moment; Frank No. 2. 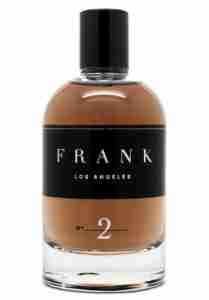 Frank No. 2 comes as the second perfume from Frank Los Angeles. The perfumes were overseen by Elizabeth Wright who also founded the perfume brand Costamor. The perfumer behind Frank No. 2 is unclear although it is most likely Bertrand Duchaufour who did Frank No. 1. For Frank No. 2 Ms. Wright does collect many of the smells of Christmas together to form that moment of quietude right in the middle of the Season.

Frank No. 2 opens with a spark of brilliant bergamot matched with an herbal lavender. That aspect of lavender is kept in place by using coriander to accentuate it. The heart is a juicy plum afloat on a boozy accord. This is one of the reasons I like this perfume because the plum stands up to the booze not by melding with it but by floating above it. What comes next is the woods. Fir balsam is the core with maplewood adding a sweetness for the plum to work with. Teak provides a more austere wood for the booze to soak. Right here is the scent of my interlude as all of this comes together. The final development is a bit of coffee and white musks as I grind the coffee to be brewed in the morning.

Frank No. 2 has 6-8 hour longevity and average sillage.

I have liked Ms. Wright’s style through both of her brands. As an FYI if you were a fan of Costamor Tabacca it has returned under the name of Frank No. 3. These are very much Under the Radar brands because they didn’t get a very wide distribution. They are worth seeking out to try especially if you need a breather in the midst of the Season.