In those early days of the internet it was exciting to discover there were other people out there who also loved perfume. One of the by-products was perfumes I had never heard of I was now hearing about. And I wanted them. It was sort of fun to watch a member talk about a new discovery and then watch it propagate over the next few months as more joined in. In that time period there were many of these waves. There are a number of my favorite perfumes that came from those times. In the first weeks of 2008 a forum poster waxed eloquently on Domenico Caraceni 1913. Which set off a chase for others to get some and join in on the conversation.

Domenic Caraceni is an Italian men’s suit maker who according to the website is the “father of Italian tailoring” In 2007 there were three perfumes released under the Domenico Caraceni brand; 1913, Ivy League, and Loren. I do not know who the perfumer is for any of these releases. What struck me about Domenico Caraceni 1913 as soon as I received my bottle was that this was my impression of a European tailor shop. There were clean citrus and woody creases along with a powerhouse floral heart which all comes together like a fine suit, impeccably. 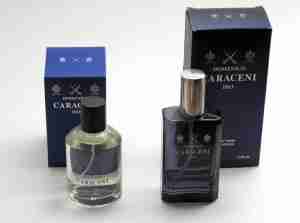 Domenico Caraceni 1913 opens on a scissors sharp citrus accord of petti grain honed with styrax. Every time I wear this I think of the glint of light along a pair of clothing shears as it travels from handle to the point. Rose forms the core of the heart and it is made less overtly floral by neroli and geranium. This was meant to be a masculine fragrance and it seems clear that they wanted to moderate the rose so that it wouldn’t become too powdery. One thing they didn’t alter was the power as the rose is at a high volume which makes the neroli and geranium necessary to try and keep it more controlled. This heart note was called “funeral home-like” by many on those early forum days. I never got that it; is a hugely expansive rose but it never tripped over into cloying for my tastes. The base is very traditional masculine territory as tobacco, incense, and cypress form the foundation.

Domenico Caraceni 1913 has 10-12 hour longevity and way above average sillage. This is one you probably want to wear a lot less than you might normally.

Domenico Caraceni 1913 disappeared in 2010-2011 but it has just been brought back into production. I have compared the new version to my original bottle and I see little difference which can just be explained by seven years of aging in the bottle. If you are one who likes rose sandwiched between citrus, incense, and woods Domenico Caraceni needs to be on your radar screen.