I like television musicals. I like movie musicals and Broadway musicals too. It is the small screen version which connects with me. It probably started with “The Partridge Family” as a child. I liked the television version of “Fame” better than the movie. I thought “Cop Rock” was awesome. One of my favorite episodes of “Buffy the Vampire Slayer” is the musical episode. Most of these shows do not last awfully long. Characters singing to the audience every week seems to wear out its welcome. It never seems to stop me from giving a new one a try. The latest television musical is Zoey’s Extraordinary Playlist. 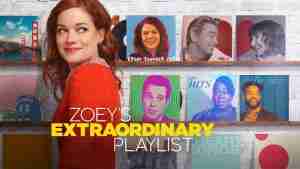 The gimmick for this show is Zoey, played by Jane Levy, hears people singing songs about their lives to her. She is the only one who hears them. Once she hears one, she feels like she needs to help. Which is the source of each episode’s plot.

Zoey is surrounded with plenty of people from whim to hear their inner music. She works at a tech firm in San Francisco. She has a busybody neighbor who is the only person to know about Zoey’s gift. Her family is going through the tragedy of watching her dad suffer through a debilitating terminal disease.

That last part is one of the things which made me really fall for the show. Creator Austin Winsberg used his own experience of losing a parent to a disease to inform that part of the writing. Many of the most beautiful moments come from Zoey hearing from her mother, brother, and sister-in-law through their songs. They sing to Zoey what they can’t speak. The most poignant is her songs from her father. He is unable to speak but to Zoey he can sing. The family dynamic is a special part of the show.

The other people sing of more normal things unrequited love, relationship issues, etc. One of the fun things is Zoey as a Millennial is not familiar with many of the older 1970’s and 80’s tunes sung to her. It makes it fun when she is trying to describe the song to her neighbor who is shocked, she doesn’t know them.

My favorite episode of the season was when Zoey sang her truth out loud in real life. While we have always seen choreographed backing instrumental versions of other singing when Zoey does it the rest of the world sees her singing for no reason. The episode forces her to face up to some uncomfortable truths she has been hiding from herself. The writers do not let her off easy. The glitch becomes the pivot point at the midway point of the season.

If you are looking for a fun show to watch and you also like tv musicals Zoey’s Extraordinary Playlist lives up to its name.