For almost thirty-seven years Alex Trebek was the host of the television game show Jeopardy! If you’ve ever read stories of contestants or heard Mr. Trebek in numerous interviews you heard the same thing. He would tell contestants prior to taping “You are the star of Jeopardy!”. For every show he hosted that was the case. He knew and innately understood this was a show where the intelligence of the contestants was the prime directive. Not placing the spotlight on the host. Which is why this current guest host as auditions is a failure.

Since the beginning of the year there had been a series of guest hosts. They came from all different places. They were able to shepherd the game professionally, but it never felt like any of them understood the contestants were the stars. They were too busy campaigning. There was one big, surprising exception to this.

A couple weeks ago they decided to name the executive producer of the show Mike Richards as permanent host with actress Mayim Bialik as host of special episodes in primetime. Then the children who inhabit the internet had to get to work tearing down those choices. They succeeded in driving Mr. Richards off the show and out of a job entirely. In the meantime there was unseemly campaigning from those the internet wants to have the job. For most of the last month all you’ve heard about in relation to Jeopardy! is nonsense about the host. 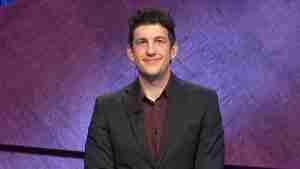 What makes all of this particularly annoying is nobody has mentioned the current 18-day champion Matt Amodio. He will be returning when new episodes begin to air. He is the third highest money winner in the history of the game. He plays an aggressive game hunting for Daily Doubles and betting big when he finds them. He is on the kind of streak Mr. Trebek loved to see and applaud. Have you seen a single story about him heading in to the new season? No you haven’t. You have heard every jerk trying to shove their way into the role forgetting who the star of the show is.

I did mention an exception. When ex-player Buzzy Cohen was named as guest host to oversee this years Tournament of Champions I expected more of the same stuff as the other guest hosts. Especially because as a player he was an extroverted look-at-me type. Except when he took his place behind the podium, he remembered who Mr. Trebek told him were the stars of Jeopardy! and he acted like that. He gave each champion their opportunity and space to thrive in the annual tournament of the best. Of every single guest host he was the only one who remembered who is important on Jeopardy!

I don’t know who they’ll eventually pick but I hope someone paints above their dressing room mirror, “You aren’t the star of the show, they are!” Until someone takes that to heart this is going to be a failure.