Not so long ago how a television series was presented was on a weekly basis. You turned up at the same Bat Time on the same Bat Channel to see a new episode. The advent of the streaming services had seemingly changed that. Amazon Prime and Netflix as the old kids on the block invented the concept of binge watching as they dropped a full season’s worth of episode all at once. The more recent additions to the streaming ecosystem seem to have decided on going back to that weekly model as CBS All Access, Disney+, and HBO Max have been streaming their series in weekly installments. I’m not sure I have a preference overall but there are some things I have noticed in the two approaches. 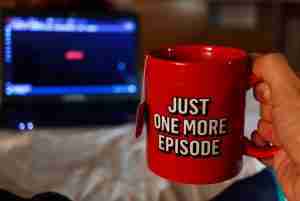 Netflix and Amazon Prime trained me to binge watch what they offered. There was a sense that these series were more cinematic in scope. Like a multi-hour movie told in chapters where you can choose when to have an intermission. This is like the smorgasbord version of watching something as you take as much as you can. When I’m very engaged the dawn has broken over my watching the final installment. Things like Ozark, The Marvelous Mrs. Maisel, or The Queen’s Gambit are fun taken in one, or two viewing sessions.

With some of the most recent new series the choice to release new episodes weekly has reminded me of the fun of having a week to speculate. The Star Trek shows on CBS All Access. Raised by Wolves and The Flight Attendant on HBO Max. The Mandalorian and WandaVision on Disney+ are all built so that the pause builds anticipation.

This is the formula of broadcast tv transformed to a digital world. What all these weekly shows have in common is a broad mystery/mythology at their core. They provide a viewer something to talk about in the days between new episodes. I remember how much fun “Lost” was as in those early internet days each new episode fueled speculation of what was happening. All the weekly streaming shows I mentioned above are doing the same thing. But that’s because the mythology provides the space to do it.

Is one better than the other? I think there is a different way to think about it. If the show is designed as one long coherent story having it all at once seems the right choice. For those who are building a mystery the weekly format adds an extra level to those who are willing to go with it.

It is nice live in a world where both can be enjoyed.