Like the search for a signature scent many of us tend to settle on one alcoholic drink that we order when we are out to dinner or at a party. These drinks are the kind made up of ingredients found at any bar from the one on the corner to the Rainbow Room at the top of the Chrysler Building. Seven and seven, rum and coke, gin and tonic, scotch and soda, screwdriver, or martini; I would venture anyone who drinks that is reading this has had one or more of those. I would also go further that there is one of those which you ordered on multiple nights out. My signature drink has been The White Russian.

The Dude as played by Jeff Bridges in The Big Lebowski

I started drinking it during the disco nights of the late 1970’s; most of my contemporaries were drinking Tequila Sunrises but I found those too sweet because of the grenadine. Then one night a friend ordered a White Russian and I asked for a sip and that became my drink. It would fade from popularity at about the same time as disco died. Except I still ordered it. It would come back into favor after the release of the 1998 movie The Big Lebowski. The character The Dude played by Jeff Bridges drinks White Russians. The movie is a confirmed cult classic and now the White Russian is a cult classic too. Whenever I order it these days it almost always elicits a Big Lebowski comment of some kind. 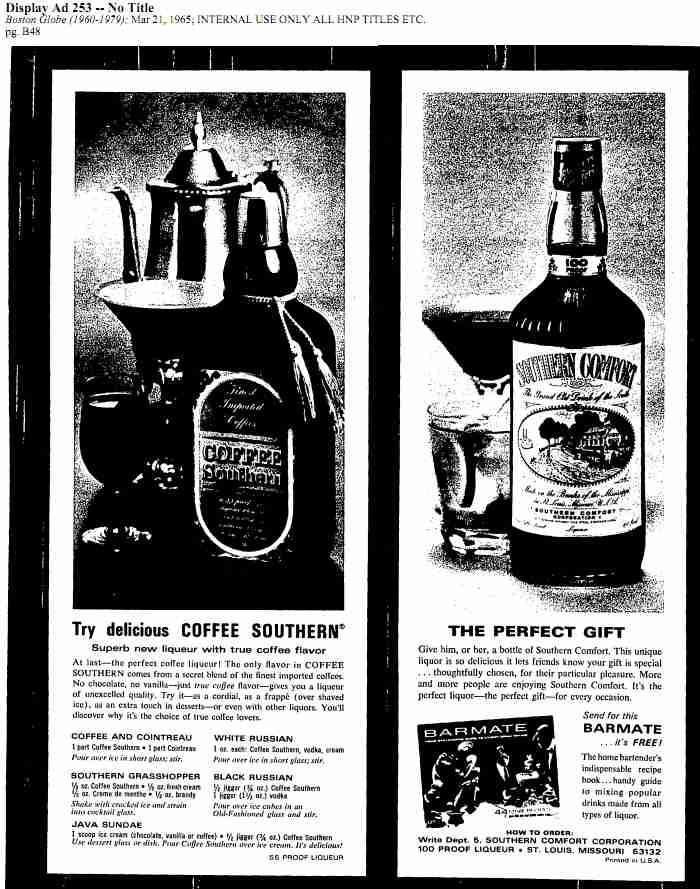 The White Russian was first introduced in an ad, seen above, in The Boston Globe on March 21, 1965. The makers of Southern Comfort had recently introduced a coffee liqueur called Coffee Southern. Like any good new product they wanted to entice customers to buy by giving out some drink recipes. The recipe is as simple as it gets 1 part vodka, 1 part coffee liqueur and one part cream. As with all simple drinks there are variations and as I’ve become more interested in the more complicated cocktails there have been times where I have experimented with some interesting off shoots. One of my favorites is to replace the cream with Bailey’s Irish Cream. Just be careful because that is three shots of liquor which goes down very easily. When I want to change it up and make it less potent I substitute the vodka with amaretto and you have a Toasted Almond. The new breed of vanilla infused vodkas is the perfect choice for a White Russian or any of the variations. After many years of drinking them I will share the current favorite formula.

1 part half and half

Pour all of the ingredients over ice and stir thoroughly.

See simplicity itself. If you’re still looking for your signature drink give The White Russian a try. At the very least you’ll learn a lot of about The Big Lebowski. “Careful, man, there's a beverage here!”