There are many things I like about Facebook. One of the more interesting things about Facebook is when there are events which seem to cause large amounts of the people who I share Facebook with to gather around. This past week of August 2014 there were two things which dominated my Facebook News Feed. 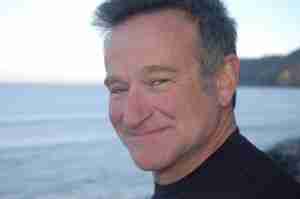 One was the tragic suicide of actor Robin Williams. As I write this there has still been no concrete reason for his desperate act, and there may never be one. Facebook was full of clips from his stand-up comedy specials and movies. He had a habit of playing roles which had more than a bit of shadow to them. These characters all managed to quell those darker impulses and learn to live with them.  As I saw these clips throughout the week I am reminded we all carry our shadows. When they start to speak too strongly to us we need to ask for help. More about that in a second.

The second thing in my Facebook News Feed was the videos of people participating in the ALS Ice Bucket Challenge. This started a couple of weeks ago with a few people posting a video of themselves dumping a bucket of ice water over their heads. The way this works is the person in the video challenges three other people to either dump a bucket of ice water over their heads or donate $100 to the ALS Foundation. Hopefully do both. Somewhere over the last two weeks this crossed over to celebrities and it seemed to particularly peak this week as I seemed to wake up every morning to a new batch. Early in the week it was the late-night talk shows, in the middle of the week it was sports teams, and towards the end of the week it was the head of every big tech company. The videos got more elaborate especially when the likes of Bill Gates engineers a complicated contraption to dump the water over his head. (There is a Windows joke in there somewhere) The ALS foundation has received over $4million in donations over the past two weeks, three times more than they raised at the same time last year.

All of this is great for raising awareness of ALS and helping the patient community but I worry about something as narcissistic as filming yourself starts to lose the message at some point. The money raised is great but does it have a real lasting effect? I like my Facebook campaigns to be a little more subtle. 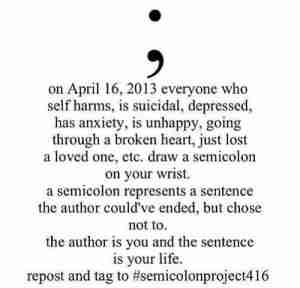 This was also a simple organic campaign to raise awareness and the pictures posted were incredibly powerful. More than a few of them had the semicolon over cutting scars on their wrist. What is fantastic is this has turned into a full-fledged organization to support those suffering from mental health issues. On April 16 this year there was another day of semicolons posted on the internet. I suspect every April 16 from now on will be the day to show off your semicolon. The power of people who have suffered showing these simple, elegant statements to those who are currently suffering is way more relevant to me. As Robin Williams’ suicide shows the decision to choose a semicolon over a period is extremely difficult. I am very happy The Semicolon Project exists so that those who suffer from mental health issues can find help and then share the ability to overcome with a simple piece of punctuation. I hope this grows into an annual celebration of finding the strength within to continue with life.