Never let it be said I don’t respond to my readers. I received a half-dozen e-mails asking about the other poodle inhabiting Poodlesville; Henry. They wanted to know his story. This week I will give Henry some equal time. 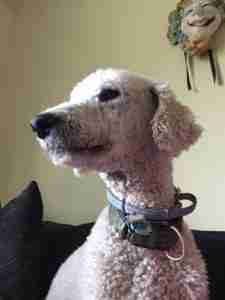 We adopted Henry in 2013. We have been a two-poodle house for a long time. After our oldest dog had passed away Mrs. C began to reach out to rescue organizations for a new poodle. Relatively quickly she was offered Henry. She took our other poodle up to see if they would be a fit. They walked towards each other on a leash. Shared poodle business cards by sniffing each other. When they both got into the universal crouch of “let’s play!” Mrs. C knew we had a match. 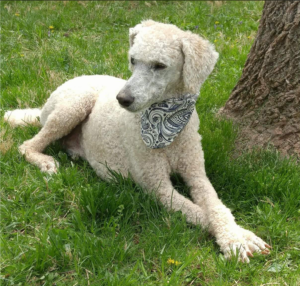 Almost all rescue poodles have some kind of adversity. It requires patience to overcome this. Henry surprisingly carried none of this. Despite having overcome two different tragic situations. The first was his initial owner, when he was a puppy, smacked him so hard on the right side of his head it caused his right eyeball to come apart inside; blinding him on that side. Thankfully the rescue organization stepped in and removed Henry from this abuse. His second owner was a young woman who loved him. Unfortunately, she had an eating disorder leading to a fatal stroke. When she was found, days after dying, Henry was curled up next to her body. He was extremely dehydrated which has caused some kidney issues we keep a close watch on. 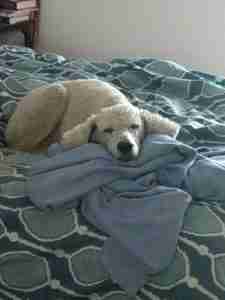 Henry is the most loving rescue poodle we have adopted. The poodle who stayed next to his owner after death is a snuggle bug. He likes curling up next to Mrs. C, me, or Jackson. It’s almost unnatural for me to be sitting on the sofa without the weight of his curled-up body next to my leg. A lot of evenings it is Henry on one side and Jackson on the other. Mrs. C calls it the “man couch” when this happens.

The other position Henry holds in our house is the Minister of Toys. We have toys all over the house. Jackson will pick up a toy and race around with it. Once Jackson has tired of whichever toy he has been playing with, Henry will amble over pick it up and move it to whatever he considers to be the correct place.

In the past our older poodles have jealously guarded their places. Often barking at the younger ones to let them know this is my spot. Henry has never been that way. When he first joined the household, he slowly won over the older poodle Rocco. After only a few months they would sleep next to each other with nary a growl. Once Henry became the older poodle the chain was broken. He loves sleeping with Jackson. They can be found with one of them resting their head upon the other most nights.

Every time I look at Henry, with his ruptured eye looking back, I marvel at the ability he has to forget the abuse of the past. He just wants to be loved. It may have taken three tries, but he has found a place where he gets as much as he wants.