In normal times Memorial Day would signal the beginning of the summer movie season. These are the weeks where blockbuster movies have come to ask for our money. These are the days when we go to an air-conditioned room to be thrilled with heroics and derring-do. Most will trace this back to the summer of 1975 with “Jaws” or two years later with “Star Wars”. Those were the undoubtedly the two movies which showed studios there was money to be made with summer spectacles. What I believe is it was a movie which is celebrating its 40th anniversary this week which was the game changer; “The Empire Strikes Back”. 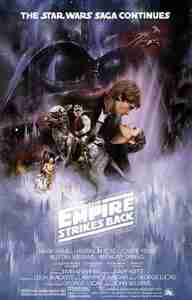 First impact is the date of release. The Empire Strikes Back was released on Memorial Day weekend 1980 the same weekend as Star Wars three years earlier. From then on Memorial Day was the date for the ambitious summer movie. This year it was supposed to be the ninth in the Fast and Furious series, F9. Indiana Jones, Mission:Impossible, X-Men, Pirates of the Caribbean, and Beverly Hills Cop would all start their respective summers out. The Empire Strikes Back solidified the date as opening day.

Movie series were created with The Empire Strikes Back. Before 1980 there were no sets of films. Nobody talked about trilogies. Sure there was Superman II but that came a month after Empire was released. That audiences would wait for three years and flock back into the theatre to see the next episode of a movie series was unheard of, until Empire. Now a movie without a number after its title seems quaint in 2020.

The ancillary toy and collectible market also became a thing because of Empire. Star Wars had a toy deal and it was successful. The marketing for Empire was much more aggressive now that the toy company, Kenner, knew there was a market. When you see a current movie tie-in of any kind it was Empire which started it all. If you are curious about any of this there is an excellent Netflix series called “The Toys that Made Us”. Episode 1 tells the story of Star Wars merchandising.

Finally the movie itself ushered in the serialized story telling we take for granted. There would be no Marvel Cinematic Universe without the climactic showdown between Darth Vader and Luke Skywalker at the end of Empire. That scene would leave moviegoers talking for three years until “Return of the Jedi” answered the questions. If a movie creates memorable characters and stories a summer audience will be happy to spend time with them.

I definitely miss being unable to see Dominic Toretto and family tear up another quarter mile this year. I can give thanks to Empire Strikes Back for making me feel that way.

2 thoughts on “The Sunday Magazine: The Movie That Changed Summer”