If you haven’t figured it out previously it is obvious that I stay up way too late with the television on. The subject of late-night television might be the thing I’ve written most about for this particular column. As one who has enjoyed the form and the energy different hosts bring to their specific efforts we are currently in the midst of a seismic shift in the late-night landscape. By September 2015 only one of the major late-night shows, ABC’s Jimmy Kimmel Live, will have the same host they had on September 2010. I have really been enjoying the way the shifting of the shows has changed the energy.

As I’ve written before the kind of hosts like David Letterman and Craig Ferguson who actively made fun of the genre have been my favorites. With both gone I was wondering if there would be one who replaced that style. I think the answer is the man who replaced Mr. Ferguson with The Late Late Show with James Corden. 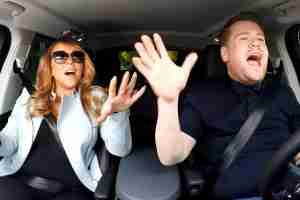 James Corden took over the slot in late March of 2015 that Mr. Ferguson had made popular. Mr. Corden has a very different personality as he radiates puckish charm. That charm carries him far as his taped bits have started to become next-day watches on YouTube. The most successful of these bits is one called Carpool Karaoke. It is where he gets a well-known musical star to carpool with him to work while they do karaoke to the passenger’s hits. In between singing Mr. Corden interviews them. The stars open up in unusual ways and the whole idea has come off incredibly well.

I sort of knew I was going to like the show when at the beginning of his second week he ventured outside of the studio onto a surrounding residential street and found someone to allow them to film the show in their living room. Guests Jeff Goldblum and musician Beck sat on a real couch and performed. The episode ended with a visit by zookeeper Rick Schwartz as he brought the typical zoo animals into the house for a visit. 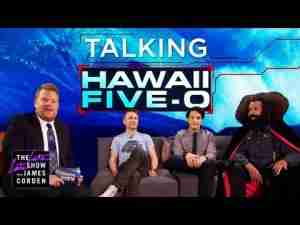 Since then he became a human piñata for Cinco de Mayo. He has visited a juice bar and a kosher market to give a regular employee a break while he takes over. But my very favorite bit is his send-up of the shows that talk about other television shows like Talking Dead. Ever since David Letterman went off the air in May the network has filled that slot with repeats of the crime procedurals that network shows. The Mentalist was that show for the first week of June and the cold open for the show that week was a bit called Talking Mentalist. They would send up all fo the conventions of these shows talking about shows you’ve just seen. They would have one of the bit part actors who only had one scene as part of the panel. The very best of all of this came on the night they had the man who hosts Talking Dead, Chris Hardwick, as a guest and they included him in that night’s Talking Hawaii Five-O.

I have always looked to the late-night shows to provide a pleasant funny companion for the wee hours of the morning. I am very happy to invite Mr. Corden to share that time with me on a regular basis.