When I was in graduate school in the early 1980’s there was this late night talk show that ran at 12:30 called Late Night with David Letterman. It was weird. It was different. It was just what I needed after a long day and night in the lab. The 12:30 slot for late night talk show hosts has offered up many unique versions of the talk show. One of the best, The Late Late Show with Craig Ferguson, is coming to an end on December 19, 2014. 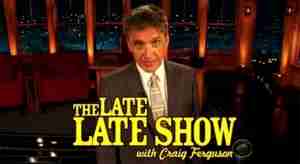 I first became aware of Craig Ferguson when he played the boss Mr. Wick. From 1996-2003. While I thought he was good in the role I had no idea how good he would be when he made the leap to host of The Late Late Show in 2005 succeeding Craig Kilborn. What has stood out even from the earliest shows was the removal of the typical talk show tropes. There is no band. There is no human sidekick. The monologue comes after a cold open sketch. This is what the 12:30 slot has always represented as the hosts have some freedom to make their own rules. Mr. Ferguson has taken this freedom and created a talk show which makes fun of talk shows. 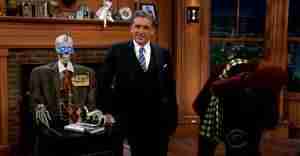 As I mentioned Mr. Ferguson has no human sidekicks but he does have two sidekicks. One is a robot skeleton by the name of Geoff Peterson who joined the show in 2010. Grant Imahara of Mythbusters was looking for Twitter followers and he told Mr. Ferguson if he could get him 100,000 twitter followers he would make him a robot sidekick. The milestone was achieved and Mr. Imahara delivered Geoff Peterson, a robot skeleton. This is in itself a comment on the near vacuous quality of the typical late night sidekick. Geoff is voiced by one of the writers on the show, Josh Robert Thompson. The interplay between Geoff and Mr. Ferguson is my favorite part of The Late Late Show. It allows these two characters to impale the inane brilliantly. The other sidekick is Secretariat which is two guys in a horse suit. Secretariat doesn’t speak but hangs out in a stall on the opposite side of the stage from Geoff. Again there is biting satire that two guys in a horse suit function as a sidekick as well as any human.

Mr. Ferguson has a refreshing interview style where he doesn’t have his staff pre-interview the guest and help shape the questions. Instead Mr. Ferguson takes some time to find out about the guest and they have a real conversation. This reminds me of the old style of interview you saw on The Tonight Show with Johnny Carson or The Dick Cavett Show. By not being sort of scripted it allows for spontaneity and sometimes chaotic side trips. When Kristen Bell is the guest it is a treat to watch two similarly minded comics trade riffs back and forth.

The final segment of every show is “What Did We Learn on the Show Tonight, Craig?” This is a parody of those sensationalistic shows like The Jerry Springer Show where after an hour of yelling and screaming a tacked on coda is meant to add meaning to the idiocy. When Mr. Ferguson does it he acknowledges the silliness of it and sometimes makes it wickedly subversive.