Like many others I am in the middle of enjoying the ongoing WandaVision tv series. I will have much more to say about it once it finishes up. What makes that tv show engaging is seeing these Marvel movie characters in a wildly different environment. It turns out the same formula works on the comic book page as the “The Immortal Hulk” series proves.

This was one of those series I ignored when it first appeared in 2018. It wasn’t until they incorporated the character into the Marvel mobile game, I play that I became a little more interested. One of the cross-promotions within the game is when a new character appears, they allow you to download a few issues to familiarize yourself with them. The in-game description was more enticing than the online one for the comic. I downloaded the first six issues. Then I downloaded all the rest of them. 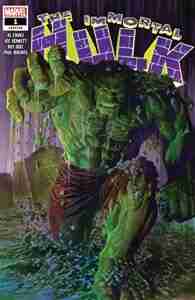 Al Ewing has been the writer behind the series since issue 1. He has created a version of Hulk who is probably the most powerful iteration. The same Jekyll-Hyde struggle at the core of the character as Bruce Banner and the monster are often at odds. The same being chased by a version of the military for their own purposes is another constant piece to the Hulk mythos. It is the other part which adds the new stuff.

This Hulk comes from the netherworld. The extra oomph to his power also comes from the same place. As the title suggests he can’t be killed in Hulk form. What Mr. Ewing does with this is to examine the entire history of the Hulk. As Banner or Hulk run into things from their past which have more power to bring them down than the military chasing them.

Mr. Ewing has seemingly delighted in using deep cut characters a long-time fan will smile at. But he has effectively used the major nemeses from the canon to be the main antagonists. I like my villains with a history. The ones chosen here all have that.

Of all the Marvel comic series, Hulk was the first one which I slowly stopped reading. There just wasn’t anything new under the sun. Mr. Ewing has brought me back to being a regular reader by taking it to the underworld.