When it comes to sports there is nothing like competing for your country at an elite level. Every athlete in any sport you can name strives to wear a uniform with their country’s flag sewn on it. My favorite quadrennial national competition is about to start this week, the FIFA World Cup in Brazil. For the next month the greatest football (soccer) playing nations on earth will compete to be named the World Champion. This is a magical moment as whole countries come to a stop when their national team is playing. As someone who has had the pleasure of attending the World Cup in 1986 and 1994 I have seen the emotion played out live. I also have treasured memories of traveling in a country on the day they are competing and sharing the experience with those countrymen. 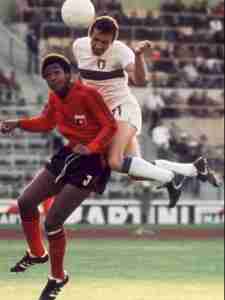 My first experience of this kind was being in Port-Au-Prince, Haiti in June of 1974 at a crowded dockside bar as Haiti took on the mighty Italian team. At the end of the first half the score stood at 0-0. Then right at the beginning of the second half Manno Sanon scored the first goal against the Italians in 19 World Cup games. The bar exploded, people danced on the dock, and boats blew their horns. Then the tension really set in as everyone hoped against hope that Haiti could hold on for a famous victory. Six minutes later the score was tied at one and the Italians would add two more before the end of the game. This was the moment I fell in love with the World Cup as a sporting event.

I’ve been in an Italian-American club when Paolo Rossi scored three goals to lead Italy to a 3-2 victory over Brazil while grown men wept with emotion. In every city I’ve lived in the Brazilian community would have an impromptu car honking parade on Main Street after each victory. The World Cup captivates the entire world and it was why I wanted to experience it firsthand.

In 1986 I spent the month of June crisscrossing central Mexico going from site to site to see games. The US had not qualified and I was this oddity, an American who knew something about the game. As a result I was adopted by one group of fans or another. The Brazilians welcomed me on to their conga drum line against Spain. The Spaniards taught me the cheers of their team a week later when they played Northern Ireland. Spending thirty days immersed in the madness made me long for the opportunity to be able to root for the US team. Eight years later it would happen.

In 1994 the World Cup came to the US. At the time I lived in Connecticut and was positioned within easy drives of three venues in Boston, New York, and Washington. I bought two tickets to as many matches as I could and I took a friend with me to every game. This time I had company as we drank Guinness with the Irish fans in NYC. Helped Spanish fans carry a coffin with Italy written on it into the stadium for their quarterfinal. I was introduced to salt licorice in the parking lot prior to a Norway match. I really enjoyed watching my friends become exposed to the fervor of the World Cup firsthand.

This year I will once again be highly distracted by the events taking place in Brazil. The US team has been drawn in to a very difficult group but like every fan I live in hope that the American lads will pull off a surprise or two. If you need to find me for the next month I’ll be at the bar watching with my new friends sharing in a world-wide experience.

One thought on “The Sunday Magazine: The FIFA World Cup”