Because I’m a wine snob my friends always ask me one question every year, “What wine should I serve for Thanksgiving?” Of all the things I get asked this is close to the easiest answer I give, “American Zinfandels”. They are the ideal partner to a stuffed turkey dinner.

For all that we know of the more popular grape varieties out of California, zinfandel were the first grapes to produce wine in the early part of the 20th century. It was almost the entirety of the grape crop prior to Prohibition. Once temperance became law almost all the vineyards uprooted their vines and switched to other crops. There were a few stubborn outliers who were able to make a living off selling wine to churches. For sacramental purposes only, of course. For the most part when you see the phrase “old vines” on a California Zinfandel it is one of these obstinate winery owner’s crops you’re drinking. 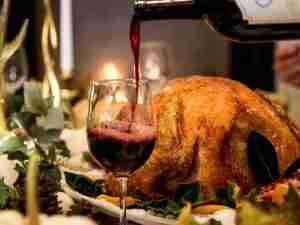 One of the reasons zinfandel was popular from a grower’s perspective is it is a sturdy grape. Not as affected by the whims of too much sun or too little rain and vice versa. That is one of its best selling points as a wine I recommend a lot. There are years which are better than others but there have been hardly any terrible years. I can just tell you to go find a zinfandel from California, Washington, or Oregon with assurance it will be a good bottle of wine.

What makes it the right wine for Holiday turkey dinners is it falls right in between the lighter pinot noirs and the heavier cabernet sauvignons. The former tends to get bulldozed by the spices in a typical Thanksgiving dinner. The latter do the bulldozing with their strong tannic profile overwhelming the food. Zinfandels fit right in providing a nice complement to the typical fall spices, even pumpkin spice. It also provides a rich counterbalance to the turkey whether you like white or dark meat.

The final piece to the equation is most zinfandels sit in the magic price zone of $10-20 per bottle. You can spend a touch more and if you are a regular wine drinker appreciate the added nuance you get. For most those zinfandels which sit in the more moderate price range will perform at the large family dinner just as well.

If you want a wine for Thanksgiving go find a nice zinfandel. Its as easy as that.