One of my favorite lines in all of science fiction comes at the end of Blade Runner when the android Roy Batty is about to hit his expiration date. He says, “I’ve seen things you people wouldn’t believe. Attack ships on fire off the shoulder of Orion. I watched C-beams glitter in the dark near the Tannhauser Gate. All those moments will be lost in time, like tears in rain. Time to die.” For years I have filled in those visions with vast space battles in my imagination. There is a sub-genre of science fiction which scratches that itch for me called space opera. As you can tell from the name it is a story told in easily plotted installments usually following the crew of a ship on their journeys. There have been some good stand-alone versions, but it has been a while since a series has caught my attention. The new Axiom Series by author Tim Pratt has done that. 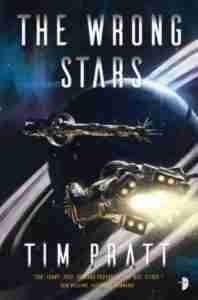 I have a feeling Mr. Pratt is also a fan because the Axion series is a step away from his typical fantasy books. I think because space opera is not as buttoned down as some other science fiction authors are granted a bit more leeway to play with their plot. 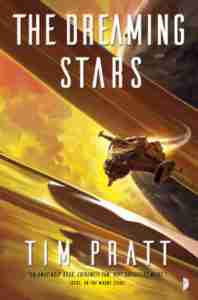 In the first book in the series, The Wrong Stars, we are introduced to our crew of proto-rebels aboard the White Raven. Captain Callie is a tough exterior head of the crew. Her second-in-command and doctor, Stephen, is in the curmudgeonly questioning type pioneered by Dr. Leonard McCoy in Star Trek. The mechanic is a cyborg, Ashok. Drake and Janice are the other members of the crew as pilot and navigator respectively. In the very first chapter the crew comes upon a “goldilocks ship”. These were ships launched hundreds of years prior looking for new worlds that were “just right”. They weren’t supposed to return. As the crew investigates they find Dr. Elena Oh who says she has returned to announce first contact with an alien race. Except since she has been gone humanity had already made contact with an alien race called “The Liars”. They have been the bridge to the stars for humankind, but they are unable to tell the truth; about anything. Once the crew brings Dr. Oh and her ship The Anjou back to their base The Liars take one look and flee. 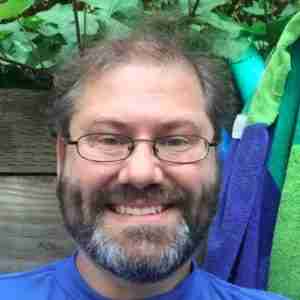 From here the uncovering of the other alien race encountered by the crew of The Anjou; The Axiom and what that portends is what drives the story. By the end of the first book Callie and the White Raven are the only ones who know and can deal with the threat posed by The Axiom. Book 2 “The Dreaming Stars” follows their journey further. That there will be book 3 next year tells you The Dreaming Stars is not where things end.

Mr. Pratt has written an incredibly enjoyable space opera I zipped through both books in a few days. They carry you along with them as the find figurative attack ships and c-beams among the stars. If you want something like that the first two books of The Axiom Series are what you’re looking for.