I have written frequently about how much I enjoyed growing up at the same time rock-and-roll did. Throughout the 1960’s and 70’s there was a crazy kind of possibility to everything. Musicians could try to do almost anything. The summer of 1969 was the eye of this particular storm. Most think Woodstock was the defining moment. Thanks to Ahmir Thompson better known as Questlove of The Roots there was another equally impactful moment now having a moment to be seen in the documentary Summer of Soul. 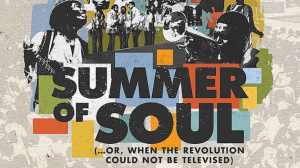 Summer of Soul chronicles the six-week Harlem Cultural Festival in NYC from June to August 1969. Producer Tony Lawrence would oversee six weekly concerts over that time. They would draw over 300,000 people in total to Mt. Morris Park in Harlem every Sunday. The shows were recorded to video, but they were never given the same treatment as the Woodstock footage. These tapes were “lost” until Mr. Thompson “found” them and made this movie. They are a time capsule with a soundtrack of some of the greatest soul music acts of the time. They also show the wider vision of the societal change happening.

It begins with the music. Many of those who are still around are given the opportunity to watch their performance from back then. One of my favorite passages is seeing Marilyn McCoo and Billy Davis watching their Fifth Dimension show which was the headliner one of the weeks. They speak about the importance of an act seen as “white” playing on a stage in Harlem. They speak about the background behind their perception of the crowd. Finally the camera lingers on their beaming faces as they watch their younger selves singing on that stage.

Sly and the Family Stone use their performance as a warm-up for their show at Woodstock a week later. The temperamental leader of the band is who he is. Yet once they start playing, they are amazing. Gladys Knight and The Pips, Stevie Wonder, Herbie Mann, and BB King are equally compelling.

One thing the movie does not shy away from is showing the black activism of the time. Rev. Jesse Jackson leading the show on Gospel Week. Preaching to the crowd from the stage weeks after Martin Luther King Jr.’s assassination. Nina Simone seemingly grows into her power as an activist on that stage. Hers is one of the most impactful segments. She realizes her voice on a stage as a musician can have impact. The crowd lifts her up with validation.

There is some time given to why it has taken fifty years for this to be seen. It comes down to no movie distributor felt there was an audience. In 2021 there is not only an audience but a message which still retains its relevance. It just means this movie makes this summer a new Summer of Soul.