I have a hypothesis when it comes to artists. The second effort is a better indication of success than their debut. There is a reason for the phrase “sophomore slump”. It shows up particularly acutely in the music business. Most of the time by the time a band is signed they’ve had years together earning that. Which also means when they enter the studio they can choose the best songs over that time span to use. It becomes much more difficult when they are asked to come up with new material for a second album in a year or two. If they can I tend to believe there is a chance for long term success. The three sisters who comprise the group Haim are the latest to show whether they can avoid this. 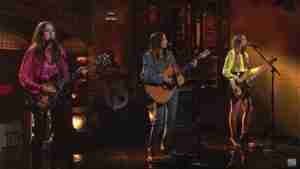 Haim was one of those acts which built their reputation on their live shows. That is much of what sets them apart in an era of production values over authenticity. They spent a year recording their first album “Days are Gone”. The length of the process was due to their using their live shows as rehearsal for when they would finally record the track. I am very fond of a less produced sound; “Days are Gone” was right where I like my rock and roll. 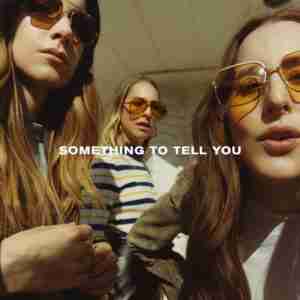 The second album “Something to Tell You” was released at the beginning of this month. It shows a band evolving. It is a funny thing when it comes to Haim because they have defined a seemingly singular sweet spot between pop music and alt-rock. When I say that you might think that would mean Haim has compromised both sides of that to land in the middle. What I think is different is they manage not to compromise anything while being both alt and pop.

The first single “Want you Back” is a good example. It is a song about wanting what you gave up while taking responsibility. It is surrounded by hooks of all kind. It has been one of my favorite songs of the summer. It became indicative of an album examining relationships in crisis. I don’t know if this reflects anything real in any of the band’s real life but if not, they do know how to cut to the bone.

Over the last month my favorite song has become “Right Now”. It is a heartbreaking song of wondering what happened. There is a plaintive organ which carries the lyrics to their end. I spoke about how their live shows feed into what gets recorded and there is a video which was shot around their recording session for this album. Which shows a more “live” version. If you compare it to what ended up on the album you get a real window into how these artists work.

It tells me there is much more to come from these three talented musicians, no sophomore slump here.