I am one of those who enjoys lists. I have come to enjoy making my own list of the best perfumes of the year annually. Whether it is me or others the process of judging different genres of anything is guaranteed to generate conversation. This week one of the biggest lists was updated.

Rolling Stone magazine released their new list of the 500 greatest albums which was last released in 2003. It is a mammoth project where they asked 300 people throughout the music industry to send in a list of their top 50 albums. Once it was all compiled, they debuted the new list at the beginning of last week. There have been a lot of discussions on the music boards but what I find most interesting is not that anything was left out. It is more on the placement of an album. Even then it isn’t that it is wildly overrated just that in one person’s opinion the albums under the one in question are better. Which is why this list works so well for me because they had 300 someones decide what the top is.

I don’t really feel too exercised about positioning because within the top 50 are Ramones (#47), The Clash (#16) and Talking Heads (#39). What I think is the greatest hip-hop jazz fusion album “The Low End Theory” by A Tribe Called Quest checked in at #43. The biggest surprise of the top ten percenters for me. 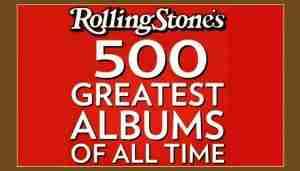 I own all the top 100 albums which was not the case in 2003. The ability to download and stream has allowed me to create my own reference library. After seeing the list I spent some time renewing my acquaintance with the top three.

I forget what a brave album Joni Mitchell’s “Blue” was when it was released in 1971. As the accompanying text to the entry says it was a singer-songwriter putting her life on vinyl for the world to hear. The authenticity of it rings true almost fifty years later. Ms. Mitchell was one of the few women who stood with the mostly boys of the early days of rock. The list reminded me why that was so.

I was a late convert to the Beach Boys “Pet Sounds”. I wasn’t a fan of the whole surfer style pop which caused me to dismiss them while I was listening in the early 1970’s. It wasn’t until I started into the NYC music scene in the mid 1980’s when I kept reading about “Pet Sounds” influencing this sound or that sound I finally gave it a chance. I understand the high placement, but this is the one which seems like the foundational album which is difficult for me to embrace. Relistening to it this week it reminds me of what it inspired more than what it is.

There were two albums in the 1970’s which constituted my introduction to soul. Curtis Mayfield’s soundtrack to “SuperFly” which is #76 on the list and Marvin Gaye’s “What’s Going On”. This was part of a window into a world a young white teenager couldn’t experience or understand. Music has always been one of the ways to communicate to an audience the life of a person of color. That “What’s Going On” still sounds like it belongs in 2020 is testament to its vision and commentary on society.