I do most of my writing for this blog late in the evening. Mrs. C and the poodle are usually in bed. I am not a fan of a silent house so like many the television is my mostly neglected companion. Most often I find a movie I have seen before and let the familiar be my background. This has been my way for as long as there have been cable and movie channels. There are movies I love having on while I do other things because just hearing the lines is enough. Over the last month I’ve added two new ones to the rotation; Pitch Perfect and Pitch Perfect 2. 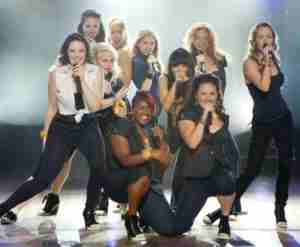 Pitch Perfect was released in 2012. I did not see this in the theater it was one of those things I found on cable. The movie tells the story of rival a-capella singing groups at Barden College. The men’s group The Treblemakers are the defending national champions after the women’s group the Barden Bellas had an unfortunate mishap during the same finals. The movie chronicles the inclusion of new freshmen Becca, played by Anna Kendrick and Fat Amy, played by Rebel Wilson. From auditions through to the final performance this is a familiar story to anyone who watches movies about underdog athletes. The difference here is the look inside a niche competition. Based on the non-fiction book by Mickey Rapkin there are a lot of amusing details to what goes into making one of the performances. The joy of these movies are the performances by Ms. Kendrick and Ms. Wilson. They provide the oversize personalities necessary for them to work at their best. 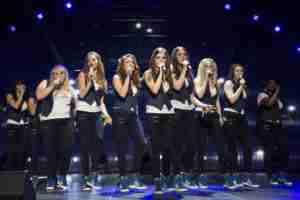 Most of the time a sequel will lose much of what made the original enjoyable. Pitch Perfect 2, released in 2015, manages to tell roughly the same story; opening performance mishap to final competition, while filling in some of the spaces with different conflicts. The other thing Pitch Perfect 2 has to do is introduce the next generation and does so with a heartfelt performance by Hailee Steinfeld as legacy freshman Emily. Her genuine excitement at becoming part of the same singing group her mother was a part of when she attended Barden College is played just right. The rest of the group is dealing with the decisions about what to do after they graduate. Pitch Perfect 2 manages to be a sequel which stands as an equal to its predecessor.

What attracts me to both movies is the singing performances which occur frequently throughout both movies. The movie casts many of the current professional a-capella singers who have risen to prominence on TV shows like The Sing-Off. It is those songs which are the real companion for me while I spend the late hours of the night writing about perfume.