A year ago, as I was working my way through the first season of the Netflix series GLOW I listed it as a guilty pleasure. By the time I finished the season there was no guilty attached to it. The show surprised me with where it finally ended up. I just finished watching the second season which took the show to a higher level.

The show is based on the original syndicated television show Gorgeous Ladies of Wrestling-G.L.O.W. If you were up late at night in the late 1980’s it was likely you ran into this show while channel flipping. The actual show had a crew of wrestling stereotypes putting on their promotion at the Riviera Hotel in Las Vegas. It was done on an elaborate faux-ballroom set with a wrestling ring trimmed in pink in the middle. It was the epitome of cheesy late-night television. This reality is the inspiration for the fictional GLOW.

The series is created by Liz Flahive and Carly Mensch after they saw the 2012 documentary on the original syndicated series. Their concept was to chronicle the women’s movement in the 1980’s. The series which has come out of that speaks to the present by looking back at that time. 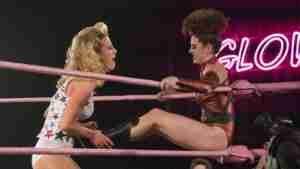 Betty Gilpin (l.) and Alison Brie as Liberty Belle and Zoya the Destroyer.

Season one introduced us to Ruth Wilder an aspiring actress played by Alison Brie. She is discouraged as she goes on audition after audition never getting and lasting acting gigs. Her best friend is Debbie Eagan, also an actress, played by Betty Gilpin. Debbie has gotten a regular acting job on a soap opera. These are the two tentpole characters through which we experience GLOW. I use the word tentpole because GLOW is a kind of circus and the other characters are equally memorable; starting with the ringmaster. 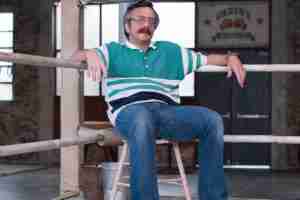 Actor Marc Maron plays director Sam Sylvia. Sam is the renowned director of b-movie horror films who has been hired to direct GLOW. He works with the producer Bash Howard played by Chris Lowell. They are really the only two men who have stories which continue.

All of Season one is the creation of the wrestling promotion introducing us to all of the other wrestlers. Because this is wrestling the characters are broad stereotypes based on ethnicity and appearance. There is an ongoing theme throughout as we learn these women, who are more than a stereotype, feel empowered by having a job which gives them the ability to make decisions for themselves. It is touched on throughout season one but in season two it is hammered home in an episode where two of the wrestlers who are mothers interact with their children. It is where the show really begins to spread its wings commenting on social issues which have meaning today.

This is all done with a comedic tone around the serious ideas. At every turn GLOW surprises as the characters grow into their roles as empowered females. The show doesn’t diminish the power men still had over these women, but they also show triumphs. One of them negotiates her way to becoming a producer showing a woman finding her way in the decision-making process of a business.

Finally, I like that everything the women hope for is hard earned. Nothing comes easy. Including the friendships.

If you want to watch something great check out GLOW on Netflix, it is one of the best television shows of the year, no guilt involved.