There are so many streaming series I wish would have the smarts to stop after one season. Too often a second season is just more of the same instead of doing something new with the story. The series which take advantage of this new way of telling stories in a creative way are few and far between. One of them is the series GLOW on Netflix which just streamed its third season.

GLOW stands for “Gorgeous Ladies of Wrestling”. Writers and creators of the series, Liz Flahive and Carly Mensch thought about basing a series around the real-life GLOW after seeing a documentary. They got the idea that a series set in the 1980’s would have lots to say about women in the workplace even in an odd occupation like wrestling. Over three seasons they have explored many of the pressures women faced trying to have a career at that time. In this third season they took the setting of the original television show, Las Vegas, and turned it into an off-the-Strip casino show. All the women in the cast have to leave their home in LA for three months in Vegas. 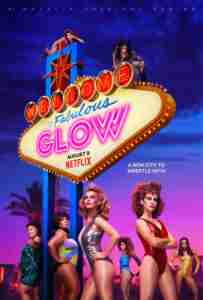 The core relationship in the show is that of hopeful actress Ruth Wilder, played by Alison Brie and her best friend successful soap actor Debbie Eagan, played by Betty Gilpin. The writers have turned the state of their friendship as the central plotline through which a season runs. One of the brilliant decisions for this season was to have the other members of the cast be roommates in Vegas. It created interesting options for the characters to use their roommate as a sounding board.

I must mention one new character for this season played by Geena Davis. She plays entertainment director for the casino, Sandy Devereaux St. Clair. She is a touchstone for many of the women who want something more. As we learn how she made it from showgirl to executive she also makes clear the choices necessary to achieve that specific success. One character embraces it, another sees it as too high a price to pay. Ms. Davis seems to be having a fantastic time in the role which mirrors the enthusiasm the rest of the cast brings to the screen.

As much as the dramatic moments resonate this is also a comedy. How couldn’t it be? There are laugh out loud funny moments. None better than when the wrestlers, in character, re-tell “A Christmas Carol” in the ring.

As I said most streaming series only have enough story for one season. GLOW has evolved every season and it is why it stands apart. Based on where this season ended the same re-invention will happen in season 4.