Over the last few months I’ve written about a streaming show releasing in weekly installments or all at once. There is also the problem of making an unlikable protagonist too much of a jerk. I’ve also spoken about the elements that make a good whodunit. Mare of Easttown on HBO provides evidence that proves some of my ideas.

Mare of Easttown is a seven-episode series written by Brad Ingelsby. It stars Kate Winslet as the titular heroine, Mare Sheehan. When we meet her, it is the night of the 25th anniversary of her leading this small Philadelphia suburb to the high school state women’s basketball championship. Right from the first episode we understand that her life is a complicated mosaic. She has been severely criticized for not finding a local girl missing for over a year. The town is beginning to believe she might not be the police detective they have always had. That’s because her personal issues include the suicide of her oldest son which she has not come to terms with. Mare is a person trying to suppress all the bad. Ms. Winslet’s performance lets the viewer in via the way she reacts without a word. By the end of the first episode another young girl’s body is discovered forcing Mare to deal with all that threatens to unearth in her psyche. 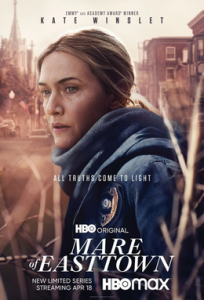 Over the seven episodes this show does all the elements of a great whodunit correctly. As viewers we are brought along through all the mistaken evidence as the story slowly reveals the truth. By the time it gets to the last episode the emotionally impactful resolution feels earned from everything that preceded it.

Mare is also one of those unlikable protagonists which seems to be in vogue these days. Mr. Ingelsby writes her as someone who is watching her grief over her son and inability to solve the old case causing her to spiral downward. It leads to a truly horrible action she takes. It caps off all the doubt we as viewers are having about whether she is an honest detective. This time the writing has laid a foundation for the action that while it still shocks, we also know where it is coming from. This is how you make the unlikable, likable. Even though every writer seems to be trying to do it Mr. Ingelsby is one of them who succeeds.

Finally this was a series which was released weekly, and we watched each episode on the night it was premiered. Each episode would end with a new key revelation. If all the episodes were available at once I would’ve just received the answer in a few minutes after seeing the set up. Watching it weekly allowed for seven days of delightful speculation. This is a case where that kind of release schedule greatly added to the enjoyment of it.

This was one of the best series I have seen this year. I am hoping for lots of nominations when the upcoming Emmys are announced. This was a perfect bit of storytelling given life through memorable performances.