I’m a dinosaur when it comes to finding new music. I miss the days of going to the record/cd store and hearing something playing in the store. I know the modern version of that is watching YouTube. I just have trouble finding those off-beat voices I like among the things I don’t care for. Which is how it wasn’t until she performed on Saturday Night Live, I hadn’t heard of Maggie Rogers.

This was in November of 2018. I would download her album “Heard it in a Past Life” a few months later when it was released in January 2019. Ms. Rogers rise is the new story of musicians finding their way. 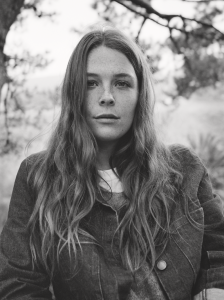 She was attending a master class by producer Pharell Williams while she was at NYU. A video of Mr. Willaims response to her singing her song “Alaska” went viral. It opened doors which allowed her to sign a deal to record her own music.

Ms. Rogers has that emotional undercurrent to her voice that draws me to my favorite singer-songwriters. It was what cased Mr. Williams’ reaction and it was what caught me late on a Saturday night through my television.

To her great credit she didn’t run straight into the studio to record. It took over two years before her major label debut. One interesting thing about that is she refined the use of electronic elements within her folk foundation exemplified by “Alaska”.

The song which shows this best is “On + Off”. There is thumping electronic melody over which Ms. rogers lays her folk lyrics. It is the starkest juxtaposition of that. The popular singles; “Light On” and “Fallingwater” do it to a lesser degree. It is what makes her album so interesting because it moves between radio-friendly folk music to something more alternative in composition.

I always look back over my iTunes statistics to see what I’ve listened to the most each year. I was surprised to find “Heard it in a Past Life” in my top 10 for 2019. Like Ms. rogers herself it just snuck up on me.