I enjoy horror movies, all kinds. If pressed to name a preference I like the “Twilight Zone” style of a horrific twist on something normal. Large parts of my bookshelf are filled with these kinds of books. The thing that goes bump in the night that will kill you is delightful to me. The new series on HBO Lovecraft Country has made this Halloween season fun for me. 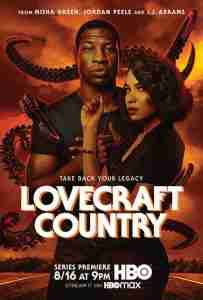 Since the release of Get Out in 2017 the horror genre has been spearheaded by Jordan Peele adding an African American perspective to it. In Lovecraft Country Mr. Peele gives young writer Misha Green the opportunity to take this to a larger canvas. Over 10 episodes set in the 1950’s a cast of black actors use the genre of horror to dig underneath the horror of racism.

What I particularly enjoyed was each episode was a classic horror movie trope. The “cabin in the woods” or “mystical treasure hunt” or “haunted house” or “shapeshifting”. It was all represented through an episode. While that was happening it was also encompassing a mythology which tied it all together. Each piece added to the final puzzle.

The basic story is Atticus “Tic” Freeman has returned from his stint as a GI in Korea to find his estranged father is missing. Tic has been fed a steady stream of pulp horror influences through his Uncle George. The first scene of the series is him dreaming a lurid pastiche of pulp icons. Those first moments let me know Ms. Green was a fan. That this was going to be done from someone who respected the material.

Tic’s search and its aftermath is what this first season is made up of. It weaves in real life racial justice moments from the murder of Emmett Till to the Tulsa massacre of 1921. Entwined is a set of suspenseful confrontations which had me leaning in to my tv screen.

The casting is fantastic and Jonathan Majors who plays Tic and Jurnee Smollett who plays Leti Lewis are the twin stories which come together in the end.

I am not sure if there will be a second season because the ending does tie up most of the important plot threads. I would be fine if it ends here.

If you are looking for some scary thrills this Halloween week, I think you can find them in Lovecraft Country.