Here in Poodlesville we just went through our hottest days of 2017, so far. As much as I love my summer cocktails when the heat rises over triple digits I crave refreshment over anything else. For that my summer go-tos are iced tea and lemonade. By themselves they are near-perfect thirst quenchers. Even combining them half-and-half makes for a great drink. I was having this discussion with some other members of our community and was asked, “you must make lavender lemonade being a perfume guy, right?” Errr….umm…no I guess I don’t know about that.

That turned my annual trip to the local lavender farm into a mission to go get some to give this a try. While I was at the farm, speaking with one of the owners, she said, “of course if you’re going to do lavender lemonade you must have tried basil lemonade, right?” Errr…..um….no I never heard of that. I was beginning to feel positively uninformed. Thankfully enlightenment was but a pitcher away.

The addition of both lavender and basil to a basic lemonade recipe transforms them into something completely different. When I tried both for the first time I was strongly reminded of how in fragrance lavender or basil interact with lemon citrus notes. Except this time, it was on my tongue instead of my nose. Describing them is going to sound a lot like I am doing a perfume review. 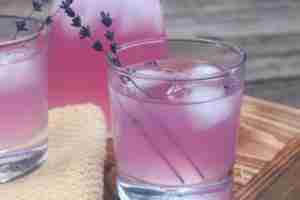 Lavender lemonade is prepared by adding lavender to a boiling solution of sugar and water. Allowing it to steep for a couple of hours while cooling. I then strain the mixture into a pitcher add fresh squeezed lemon juice and water. Stir, followed by adding a lot of ice. It generates a light lilac colored drink giving it a festive air.

When I write about lavender in perfumes I mention how much I like those that capture the herbal character of it. When you extract it into hot sugar water it is that herbal quality which is transferred into the liquid. Combined with the tartness of lemons it makes for the same refreshing give-and-take which makes so many colognes with these ingredients so enjoyable. 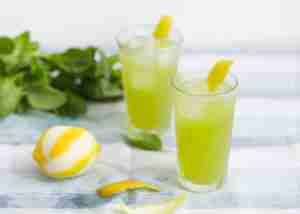 Basil lemonade is made more like a mojito is; than the recipe for lavender lemonade. I take some basil leaves and some sugar in a pitcher. I use my cocktail muddler, but a big wooden spoon would work as well, and I crush the basil leaves and sugar together until I get a kind of green flecked paste consistency. I add lemon juice and water stirring until everything but the basil leaves dissolve. I strain it into a pitcher filled with ice. This adds a green hue to the lemonade which is also festive.

Basil lemonade is a bit more serious than the lavender version. By crushing the leaves instead of steeping them the basil provides a sharper taste contrast to the lemon. They go incredibly well together even with that being said.

I just visited our local lavender farm for the recent harvest when I saw the owner again I told her how much I enjoyed these lemonade variations in the year since I saw her. She smiled and then asked me, “did you try rhubarb lemonade?” Errr…um…no; to the rhubarb patch I go.