I would like to believe that my readership has grown over the nearly six years I’ve been writing Colognoisseur because of my way of communicating about perfume. That is true for many of you. One thing I am sure there are a lot of readers who visit because of Jackson.

Jackson is our standard poodle we adopted three years ago on January 2. I’ve given a yearly update on him and it has become one of the most read things on the site. Along with the number of people I get communication from who ask about him along with perfume. Jackson is definitely one of the most popular things here. Time to give you the update for year three. 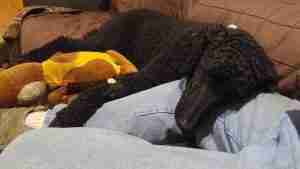 The biggest change in his life was the loss of his older poodle pack mate Henry in November. For most of the time Jackson has been with us it has been Henry who passed along the rules of Poodlesville. He taught him to bark at the twilight deer who walk through our front yard. He also showed him that all squirrels belonged in the trees in our fenced back yard. He also showed him how to butt his head under an arm for attention. Jackson has gotten very good at that one.

Mrs. C has been very wise in how we deal with the passing of a poodle in our house. We have always taken the survivor with us to the vet on the day. After the vet had administered the shots and Henry was gone, we let Jackson walk over to him. It allowed Jackson to register, however dogs do that, Henry was gone. It kept Jackson from looking for Henry. I wish it would’ve kept me from looking for Henry in all his familiar places right after. 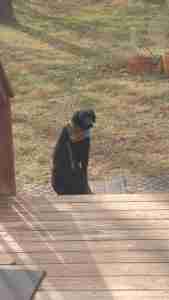 It has been interesting watching Jackson get used to be an only poodle. When there was another dog Jackson would scarf up his food immediately. Now eating is a leisurely all-day affair. When Henry was here the order on our sofa was Henry, Jackson, Me, and Mrs. C. Now it has changed to Me, Jackson, and Mrs. C. It seems like he is doing okay without a wingman.

The other ongoing project is getting him to be less scared of the world outside of Poodlesville. That is accomplished by my taking him for walks where he runs right into the new sensations in his world. He still perceives anything new as a threat running to put me in between him and the new scary thing. 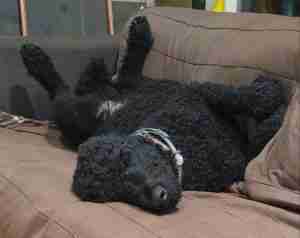 What has been very gratifying to see is his interaction with a family I play Pokemon Go with. They have a young daughter who has become the only other human being Jackson willingly goes to. Whenever Jackson sees her his tail wags while he cranes his head forward for the ear scratching she gives him. He likes her Mom and Dad, too. He doesn’t shy away from them if we run into them without their daughter. This is tremendous progress for a poodle who viewed every other person as something to be frightened of. When he slowly wags his tail while getting scratched by his little girl, I smile all over.

For all of you who have asked; Jackson is doing very well. He might not have another poodle to snuggle with, but I feel he knows he has a lot of fans out there. Thanks to all of you who care about him, too.