It has taken me a while to finally catch up on the Netflix series House of Cards. I mostly watched a few episodes on my trans-Atlantic trips. Only recently did I have the opportunity to finally get all the way through the third season.

House of Cards is based on a novel by author Michael Dobbs and a British version of it shown as a 4-episode miniseries in 1990 was written by Andrew Davies. That would have two more 4-episode sequels in 1993 and 1995. This story is of Francis Urquhart who is the Whip of the Conservative Party in the House of Commons. After being snubbed for a desired Ministerial post after helping another man into the post of Prime Minister the story is of Urquhart’s rise to power by destroying those around him. Actor Ian Richardson played Urquhart with a conniving smile hiding the very sharp teeth and mind underneath. His wife Elizabeth was his partner in all of his scheming. The thing which set House of Cards apart was that Urquhart would speak directly to the audience from time to time doing what is referred to as breaking the fourth wall. I watched this series when it first aired and loved everything about it. 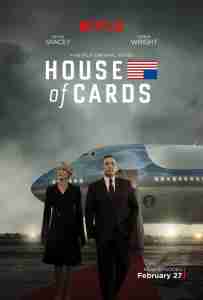 When I heard a few years ago that Netflix has commissioned an American version starring Kevin Spacey. I was intrigued but not enough to go out and get Netflix to see it. Those who read my description of the British version will recognize many of the same themes except in an American setting. Mr. Spacey’s character is Francis Underwood Congressman from South Carolina. He also gets snubbed by an incoming President and decides to take him down. Underwood also speaks to the audience breaking the fourth wall too. For those who have seen the original series many of the same plotlines found their way to the American version.
The two biggest differences was there was much more background given to this version of Francis. We get glimpses of the man who would become the manipulator. Secondly while Urquhart’s wife was a big part of the original series actress Robin Wright has really created a mostly different character in her role as Claire Underwood. It is her performance that has really made the American version so enjoyable for me.

If there was any issue I had with the entirety of the British version and the first two years of the American version was our protagonists had no antagonists worthy of standing up to them. All of the scheming and plotting went down with little hitch. I never believed the adversaries for Frank and Claire were on their level. Season three brought in a number of characters who not only stood up to the Underwoods but manipulated them. I am looking forward to season four because it is not so easy to see these characters being easily dispatched.

House of Cards is an amoral tale of political power and what some will do to get it and keep it. It is well-written by American writer Beau Willimon. The performances by Mr. Spacey and Ms. Wright are as good as it gets. The only slight drawback to these characters is I feel funny rooting for them to have their scheming succeed. It is a nod to the writing that behavior which would make me recoil in real-life kept me binge watching my way through the last two seasons in a week.

Season four will be released in early 2016. I am already looking forward to it.