When I was fourteen years old, in 1973, I went to the theatre to see a movie called “Westworld”. I was fascinated with the idea of a theme park populated by robots where you could live out a fantasy in a specific era. In that movie besides the titular area based on the American Old West there was also Medieval World and Roman World which are what you might expect them to be. Of course, the movie is the story of what happens when the programming stops functioning and the safe robots become dangerous. It was one of the earliest movies to explore the idea of artificial intelligence growing beyond the boundaries of its internal code. There have been so many cautionary tales since then it is a wonder people are so comfortable talking to Siri, Cortana, or Alexa. The storytelling potential is so great that it has come full circle with the recently released ten-episode series called Westworld on HBO.

This new version tells the story of a theme park which only is set in the American Old West; no knights or togas in this version. It tells the story of the robots referred to as Hosts. The humans who come to the park as Guests as well as the humans who keep it all going. In the first episode, you realize this is not only going to be a story about the humans but the Hosts are also undergoing change. The remainder of the series is whether that change is evolutionary or programming. 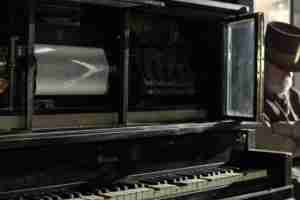 This should have been something which I should have wanted to see every week as it came on but for some reason the story moved too slowly for me. There were moments of genuine surprise but they were between long stretches of characters repeating some of the same actions. There is a plot device to that but it began to feel like I was treading water more than I was moving towards something. One of the cleverer devices used to delineate specific chapters was a player piano which you would see catch and begin to play as the paper roll unspooled. What made it fun is sometimes the piano is playing a Joplin rag and sometimes it is not. In those times, it is foreshadowing of things to come. 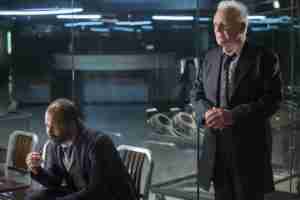 While I have some quibbles with the speed of storytelling the performances greatly helped my motivation to keep watching. The two which interested me the most were Robert Ford as played by Anthony Hopkins and Bernard Lowe played by Jeffrey Wright. Ford was one of the original architects of the robots and has been at Westworld from the beginning. Bernard is his current Head of Programming. There is one scene at the end of episode seven which reveals exactly who is in charge at Westworld that stands out.

I really wanted this to be about two or three episodes shorter. I think there are moments when the writers are too enamored of the importance of the tale they are spinning that they become too repetitive in delivering the desired message. In my favorite moments of the series it is the times when a character is revealed to be something beyond their social or literal programming where it is at its best.

I’ll have to sit down with Siri, Cortana, and Alexa to get their impressions.