With Jon Stewart leaving The Daily Show and The Colbert Report gone it would seem that the shows I found most funny about the news have left me hanging. Except for the last year there has been another show which has become my favorite look at current events with a twisted sense of humor; HBO’s Last Week Tonight with John Oliver. 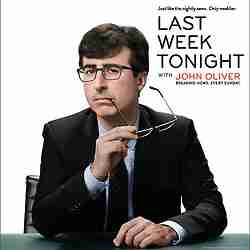 John Oliver was a long-time member of the troupe on The Daily Show. When it was announced he was going to have his own weekly recap of the news on HBO I wasn’t sure if it was going to be that good. Turns out I was very wrong about that. The show is structured with an opening where Mr. Oliver covers a number of current events with his sardonic perspective. What I have come to look forward to every week is his closing segment where he takes on a subject over 10-15 minutes. That it is funny most weeks is a given. What has really made me appreciate him is his ability to provide a visualization where he really brings home the point he is trying to make.

When he was speaking on income inequality he used a lottery ball metaphor at the end of the piece which again has an impact when you see it.

This uncommon way with visualization turns complex topics into easier to understand topics. All of this is done with Mr. Oliver’s biting wit. His outrage simmers just underneath the humor on the surface. I really enjoy everything about the show.

If you’re feeling the departures of Jon Stewart and Stephen Colbert from the humorous take on the news give John Oliver a try. I think you will find it unusually well-presented fun.