For the next ten days I will be consumed with football players and how many points they can score for me. No I haven’t won the lottery and purchased a National Football League team. I am just one of an estimated 40 million fans who play fantasy football.

Fantasy football is a game where you build a team of current players by drafting them from a pool of all players. Each owner in the fantasy league builds a team this way. Each week throughout the season you match your team of players against another owner’s team of players. All of the stats those players accumulate on that specific weekend count toward that week’s score. Whoever has the most points after the last game has been played has won the match. I have been doing this for fifteen years and it has dramatically changed the way I watch football on Sunday. It has also been embraced by the NFL as according to Forbes the fantasy football market provided $11 billion in revenue in 2012. That is more than the $10 billion made from traditional things like jersey sales and such. This disparity can only have gotten bigger. 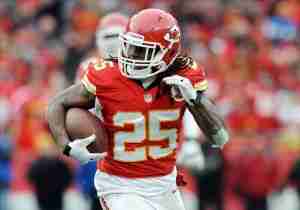 Jamaal Charles the consensus No. 1 pick

One of the reasons for the support from the NFL is it encourages fans to watch games not involving their home, or favorite, team. Most players I play with will have a couple players from their favorite team but you usually can’t, and don’t want to, fill your team up with players from one team. I know on Sunday I watch the Dolphins play but for the rest of the day I am paying attention to the games that not only have my players in them but also the games which have the players my opponent is using. Television ratings for the NFL have continued to rise every year and I believe fantasy football fuels some of this. I have purchased NFL Sunday Ticket just so I can watch any game I want to; i.e. the game with my players in it.

These next few days are arguably the most fun as I connect with the other owners in an online draft room and start picking players. I play in seven leagues all of which I have participated in from 3-15 years. I have had good years and won championships and bad years. 2013 was a bad year for me as I did uniformly bad across all of my leagues. My strategy has always been to target a few key players that I try to draft on most of my teams. Last year all of those players got injured or did not produce high enough point totals. Which means I will be drafting highly in most of my leagues allowing me to potentially turn things around.

Instead of assessing the latest from Guerlain, Comme des Garcons, and Chanel. I’ll be deciding between Charles, McCoy and Forte to spend my draft pick on. For the next ten days those are the most important names to me.