I am already on the record as finding most movie prequels dreary affairs. They spend too much time trying to explain clever pieces of the original source material. If you ever want a terribly painful example of this watch the clip of how they explain Han Solo’s boast about making the “Kessel Run in less than 12 parsecs” in the prequel “Solo: A Star Wars Story”. It is this kind of writing which pervades most prequels, the need to explain things which don’t really need explaining. It does the opposite, draining the fun out of everything they claim to want to add to. Therefore I was surprised to enjoy “Cruella” as much as I did. 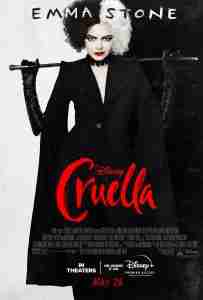 Cruella is the prequel story of how the villain of 101 Dalmations came to be. When I heard this was coming out it was consigned to the “not interested” list. For all the reasons above. It wasn’t until I saw an interview with the two stars Emma Stone who is the young Cruella and Emma Thompson who plays the haughtiest of haute couture designers The Baroness.

The heart of the story is Cruella becoming an apprentice designer to The Baroness. This wasn’t trying to explain things from 101 Dalmations. Instead it was a battle of fashion wits between our heroines. I forgot she was in another movie because the antics of the two hard-nosed designers facing off was so much fun. It all leads to a delightedly manic final act which is where most of the call backs to 101 Dalmations happen.

It is this which all subsequent prequels should pay attention to. Treat your story as its own thing which only at the end will connect to the material you are supposedly deepening.

I also must mention the two actors named Emma. They seemingly have a ball tearing into these larger-than-life caricatures. It is because I enjoy them both that I was willing to take a chance on this. It was well worth it.

One thought on “The Sunday Magazine: Cruella”