One of the things I’ve written about before is how important representation is in geek culture. The ability for anybody to look on the movie screen and see a hero that looks like them. Two years ago “Black Panther” gave that to the African American community and the world. The person who lived that beyond the movies was star Chadwick Boseman who died on Friday. There are few movie stars who took on the extra responsibility more graciously than he. 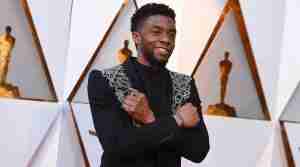 We live in the Washington DC area and Mr. Boseman is an alumnus of Howard University. As a result we got to see a lot more of him. What always struck me is he knew what an impact he had made in his portrayal of an African king of a nation that was technologically advanced populated with fierce warriors. He knew this was a new way for people who looked like him to see themselves. That meant once the cameras were off and the movie long gone from the multiplex Mr. Boseman still had to represent Black Panther.

Most actors would shy away from that responsibility. I watched Mr. Boseman lean into it time and again. Whenever anyone crossed their hands across their chest in the “Wakanda Forever” salute he returned it. I know this because Mrs. C and I were out walking around DC over a year after the film was released. I saw these kids making the arm gesture wondering what was going on until I turned around. Mr. Boseman was a few yards behind me with a big smile on his face as he returned the salute. There were no cameras or anyone to notice yet he lived the responsibility of his movie role in his life.

When I read that all of this came after he had been diagnosed with Stage III colon cancer it makes it even more beautiful. He was one of the few who knew he wasn’t going to be around to watch Black Panther grow old. He seized every opportunity to make sure it didn’t go by without notice.

He was a talented actor in so many roles. Yet it will be this portrayal of a comic book superhero that will allow him to live on for decades. He will inspire for as long as people watch. Truly living up to “Wakanda Forever”.

One thought on “The Sunday Magazine: Chadwick Boseman”