There are many people who will flip to the last page of a book and read it. I don’t do that. I like having a book get me to the destination on its own pace. The new book Black Leopard, Red Wolf by author Marlon James has the protagonist tell you the ending in the very first line of this first volume of an epic fantasy trilogy. 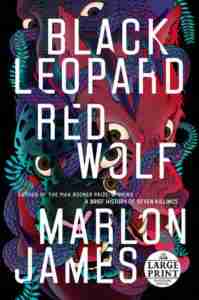 Mr. James has chosen to follow up his 2014 Man-Booker award winning “A Brief History of Seven Killings” with Black Leopard, Red Wolf. The narrative flow of that book carries over to this one. The space moves from Jamaica to a fantasy version of Africa. This is the second epic fantasy series which has taken Africa as a seed upon which to grow a fantasy landscape. It allows Mr. James to employ much less known cultural fantasy tropes. Which means for a Caucasian reader it has surprises which spring from my lack of knowledge. Unlike when there are fantasy realms based on European foundations. 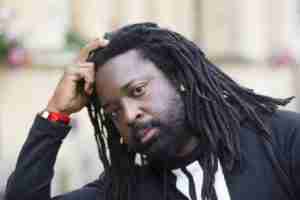 The story is told by Tracker who at the beginning of the story tells the reader that “The child is dead. There is nothing left to know.” That child is who Tracker is asked to find. Tracker also warns you he is maybe an unreliable narrator, or one who moves between worlds, when he tells the story of how he left his family and name behind to become Tracker. There are two different versions. That is the narrative quirk which keeps a reader guessing exactly what is going on as Tracker circles around different narrative beats. Mr. James delights in telling this fractured narrative similar to the way a Tarantino movie unspools.

Another similarity to Tarantino is the quantity of the violence. The battles are bloody and bone-crunching. The sex is also unflinchingly portrayed. Mr. James seems to have a fascination with the scents of sex. You can be sure all of that was interesting to me. He writes it so vividly I knew I could add a smell-track if I wanted to from my box of essential oils.

Tracker is joined on his task by a typical coterie of epic fantasy characters. Witches, giants, werecreatures, and almost anything else you can think of is here. Mr. James uses the African legends in place of the European ones.

This is the first volume and we are left with many questions. I have read the succeeding books will tell the same events from one of the other characters points of view. Considering how uncertain I am of the truth of Tracker’s narration if another book gave a different perspective, I think that would be a fun way to fill in the blanks. Black Leopard, Red Wolf is only the beginning.