I really enjoyed my ten days of the Pierre Benard Challenge last month. One thing I realized is I wanted to keep doing it. To that end I am going to write about perfumes which connect to an emotional time in my life. I am starting with the summer of 1983 Fort Lauderdale, Florida. There is one perfume I associate with that time.

In 1983 I was heading into my last year of graduate school at the University of Georgia. By the time it came time for me to head back to S. Florida for a couple weeks I was burned out. The research was going poorly. I was taking my frustration out on everyone around me. As I pointed the Camaro south from Athens, Georgia I needed a mental break. Being back in S. Florida would always be that tonic.

The cassette player was loaded with sing out loud anthems as I made the day-long drive. One fun thing about being home is I never really got to spend much time before a friend contacted me. My mother thought it was funny that I thought I could have a quiet day to myself. Especially when the phone would start ringing the morning after I returned. 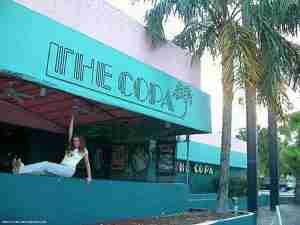 The first call was my friend Adam. He asked me if I wanted to go dancing that night. I loved going dancing with Adam because our destination was the largest gay bar in the area The Copa. I always found the act of dancing was part exercise but part de-stressing. I could just go dance my heart out. Which is what I did. The other reason I enjoyed it was the music. The DJs at The Copa were always weeks to months ahead of the radio. By 1983 The Weather Girls’ “It’s Raining Men” had been released the year before. At any of the straight clubs “Flashdance” was the song of that summer. Not at The Copa, they had embraced the new bands like Yaz, Thompson Twins, and The Human League. I even heard this single from a new singer “Holiday” by Madonna. Every song, with every thumping beat made my cares go away.

That dance floor at The Copa also had a scent in 1983; Chanel Antaeus. I had seen the commercials but had not connected this scent with that until I asked. I would buy a bottle a few years later as I was just beginning to add more to my dresser. It is still a great powerhouse. It was the second perfume of Jacques Polge’s time as in-house perfumer.

Antaeus is a product of its time as a strong leather chypre. It goes through the same herbal citrus top accord prevalent back then. It also uses clary sage, basil, thyme, and coriander as the herbal contrast. It has always been that which captures my attention. It moves towards a leather accord given a hint of sweaty insouciance through castoreum and musk. This all goes on the traditional oakmoss-laden chypre base.

Of those early Chanel masculines I wear Egoiste and Pour Monsieur Concentree most often. When I need to dance it out then I spray myself down with Antaeus and turn the music up.

Disclosure: Based on a bottle I purchased.