One of the many barriers to having fragrance breakthrough as an accepted art form is the need for a consistent vocabulary to evolve from the discussion of perfume. The perfume community doesn’t even have consensus on how to describe a specific fragrance. Consumers rely on the list of notes to help them decide whether they want to give a perfume a try. If they don’t like jasmine they are unlikely to try something as soon as they see jasmine in the list of ingredients. But should they? There are perfumes where the jasmine is used as a note of contrast and foundation never rising to noticeable levels. By just reading a note list a consumer might miss out on something they would really like because they see the note they don’t like in the list. The companies have become skilled in the art of describing accords in ever more flowery terms. There is one perfume I got the press materials for which called it “The Elixir of Love” accord. I have no idea what that means and depending on my interpretation it could go in so many different directions. In the end these descriptions are no more illuminating than a list of ingredients.

This has come to mind again as Chandler Burr has re-started his Untitled Series on Luckyscent. Mr. Burr is one of the most active proponents of making olfactory art something substantial. Towards that end he has used the language of other arts to describe those perfumes he considers worthy of being called olfactory art. Mr. Burr described specific “schools” of perfume and showed examples of each during his exhibit at the Museum of Arts and Design in NYC. Mr. Burr is also very steadfast in his insistence that fragrances should not be broken down into a list of its components when describing it. He likens it to looking at a painting and describing it only as the colors displayed on the canvas without describing the overall artistic display.

When taken to the extreme I agree with him; a simple listing of the notes does not convey anything special about the overall composition. Where I disagree is that notes have no place in the description of a fragrance I think is olfactory art. I would never write about Thierry Mugler Angel and not mention the use of ethyl maltol Olivier Cresp used to create the cotton candy smell within this game-changing perfume. You can’t talk about Chanel No. 5 without talking about the aldehydes or Lancome Tresor without considering Sophia Grojsman’s use of an overdose of galaxolide. The very use of these materials in unique ways, I believe, requires us as writers to point them out. It is the ingenuity of the perfumer and their intuitive way of taking a raw material into a heretofore unimagined direction which often sets apart a fragrance as something worthy of the label olfactory art.

Here is where it gets a little tricky though. There are some fragrances which are so intricately composed to create a desired effect that trying to pick it apart into its component notes is completely irrelevant. Calice Becker’s By Kilian Back to Black, Bertrand Duchaufour’s Sienne L’Hiver, and Marc-Antoine Corticchiato’s Parfum D’Empire Musc Tonkin are such amazing still lifes that I always just experience them on that level without overanalyzing the notes which bring these exquisite perfumes to life. This is where I and Mr. Burr are in complete agreement but this can’t apply to every fragrance. 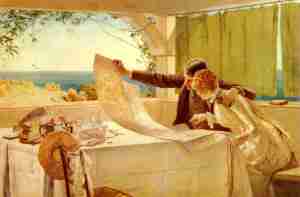 Every writer has to make the decision on how best to communicate their experience with a perfume. I decided early on to plant my flag firmly in the middle. I always try to communicate the way a perfume makes me feel without relying overmuch on the individual notes. Then I usually spend the next paragraph exercising my analytical skills tearing it apart into the notes. This captures my two-sided love of olfactory art. I want to be transported by a great fragrance as any art lover does and hope to communicate that. The scientist wants to know how that was achieved and so that part of my psyche delves deep looking to figure out the inner workings of that which I admire.

Which is correct? I don’t think anyone can answer that for sure at the moment. What I can say unequivocally that the more conversation we have about the perfumes we think rise to the level of olfactory art the closer we will become to creating a uniform language of perfume. So to all who write about perfume whether on Facebook, a blog, or a forum pick the way you want to describe your favorite fragrances and add to the conversation; together we will create a language of perfume.