This is the ninth year I have done a variation on the classic “’Twas the Night Before Christmas” by Clement Clarke Moore for my Christmas Eve post. For 2017 I was a bit inspired by another magical character Mary Poppins. I imagined Jolly Scent Nick as a Christmas version of the practically perfect nanny.

Here we are, 17 Poodlesville Lane. Home of Colognoisseur, Mrs. C, and the poodles Jackson and Henry. Looks like the winds from the east. What’s about to happen has happened before.

I was letting the poodles in from their final patrol of the moonlit Christmas Eve yard. I looked at the stockings, hung so neatly. Mrs. C had just fallen asleep with two poodle balls of cuteness snuggled next to her. While I was out, I felt the wind shift; wondering if that was for good or ill. Then answer came when an incredible racket was heard in the sky. I knew it must be magic because Mrs. C and the poodles continued to dream oblivious to the noise I heard.

I ran to the picture window to see a silhouette flit across the full moon. It looked like a sleigh being pulled by eight reindeer. I heard the driver shout out their names; Now Coco! Now Jacques! Now Jean and Francois! On Robert! On Yves! On Annick and Estee! Head for the roof! 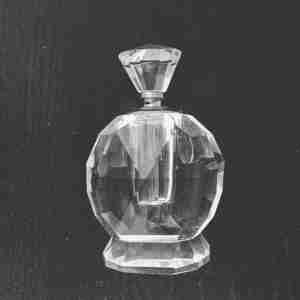 As I heard the hooves above me a noise from the fireplace drew my attention. With a whoosh Scent Nick was there. A slight scent of amber accompanied his appearance. An ahem preceded him observing, “close your mouth we are not codfish”. He was dressed as the last time I had seen him; red coat and pants trimmed with white fur. The delicate tinkle of crystal in the bag over his shoulder let me know it was full of bottles. His eyes sparkled with mischief. His dimples radiated joy. His cheeks were matching roses. The nose? That was a cherry. He gazed upon me with a smile surrounded by a beard white as snow.

Scent Nick had always made Christmas brighter for me. He let out a belly laugh which I always heard as “Eau, Eau, Eau” instead of the more traditional laugh he was known for. I asked excitedly what he had for me in the bag. He said to me, “Why complicate things that are really quite simple? Close your eyes and breathe in.”

As I did the scents of home washed over me. The cookies Mrs. C had cooling. The poodle’s sweet muskiness. Even the woodsmoke smell Scent Nick had stirred up upon his arrival. I heard a whisper in my ear, just before I opened my eyes, “Anything can happen if you let it.”

As I looked around, I heard Scent Nick whistle followed by the sound of the reindeer launching into the air. As I watched them fly away, he said “Happy Christmas to all, and to all a good night”. My heart filled with joy I turned from the window to see a delicate crystal flacon. The label on its side read “Eau de Family”.

The wind has shifted again with the departure of Scent Nick. The denizens of 17 Poodlesville Lane slept with a contented soul. Until it happens again a year from now.

I could easily have found a flacon labeled “Eau de Readers”. This year has brought me a great deal of joy sharing my thoughts about perfume. Part of that has been the interactions I have with many of you. To everyone who visits here I wish you the most magical of Holiday seasons. I think Scent Nick has some other stops to make.