As much as I enjoy my perfume my first encounter with fragrance comes every morning on the end of my shaving brush. It should be no surprise that there is a veritable metropolitan skyline of stacked pots of various shaving creams on my vanity. Along with my old-style Gillette Red Tip double edge razor my whole morning routine is a throwback. Like my knowledge of perfume my experience with different shaving products came through an internet site called Badger and Blade. While I was familiar with all of the aftershaves and colognes the members were talking about there was one which I had never heard of, Alt-Innsbruck.

In the 1930’s menthol cigarettes were invented with the idea of the menthol somehow soothing the throat. They were sold under the brand name Kool. Menthol as a soothing adjunct to tobacco was also on Austrian pharmacist Franz Gatterer’s mind when he designed Alt-Innsbruck in 1953. Hr. Gatterer wanted his fragrance to do double duty as both aftershave and eau de cologne. The idea was the menthol would soothe the razor burn early on and the tobacco would provide a rugged masculine scent for the rest of the day. Hr. Gatterer quite adroitly achieved his dual purpose as Alt-Innsbruck works well on both levels. 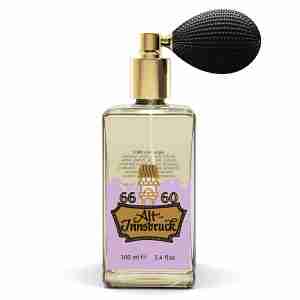 Menthol itself can be a problematic note for many and what your tolerance is for it will decide how much you like Alt-Innsbruck. Most often when menthol is in a perfume it has a sharply delineated purpose. In Alt-Innsbruck Hr. Gatterer’s menthol comes off like an emulsion. The menthol is very intense but made diffuse. I most often think of Vicks Vapo-Rub in the early moments when I apply it as it feels like the menthol is in a thick petroleum matrix. If you’ve ever smelled a curing barn with racks of tobacco leaves drying you will know there is a natural mentholated quality present. That is the transition from the opening skin soothing moments to the tobacco eau de cologne phase. Hr. Gatterer uses both the tobacco flower and tobacco leaf. As a cologne it carries a richness that the menthol helps by adding to it with a faint echo of its power from the opening.

Like all Eau de Colognes from the 1950’s this is a temporary fragrance or it requires topping up throughout the day. The difficulty to that is you get the menthol blast at the top again. Where I like it in the morning after my shave it is more problematic when I apply it a second time in the afternoon. The bright spot is the menthol phase also moves pretty quickly. The real bright spot is the tobacco part of Alt-Innsbruck is really amazing. It is as good as tobacco perfumes that are sold at ten times its $34.00/100mL price tag. If you’re a fan of menthol and tobacco or you’ve kicked the smoking habit and miss your old Kools give Alt-Innsbruck a try.