Two of my best friends shared a love of wine with me. When we were in college together, we learned through experiencing what we could. I would say that is when we began to develop out ability to distinguish the different varieties of wine.  Our shared knowledge would soar when we found ourselves living in the New York City area after graduation. I don’t remember which one of us found the book first but when we opened “Bordeaux: The Definitive Guide for the Wines Produced since 1961” by Robert M. Parker Jr. we were captured by the matter-of-fact talk about wine. Mr. Parker would become the most influential wine critic in the world because of it. 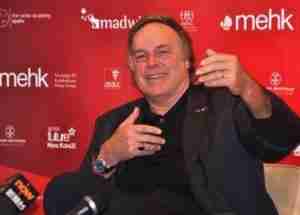 Mr. Parker’s fascination with wine happened because of a girl he fancied. He followed her to Alsace France and besides finding his wife he also found French wine. When he returned to the US, he finished his law degree, but his inspiration was in a bottle of French wine. Over time he would realize the current wine publications were mainly shilling for the brands who advertised on their pages. He wanted to run a publication which survived only on subscriptions while producing unbiased wine reviews and commentary. “The Wine Advocate” was born in 1979. Mr. Parker would begin a career of visiting the wineries. In the early 1980’s he would correctly predict some of the great French Bordeaux vintages from barrel tastings. He would become especially known for being the first to laud the 1982 vintage using this method. Many others felt differently. My friends and I knew nothing of this. Our introduction was through his book. 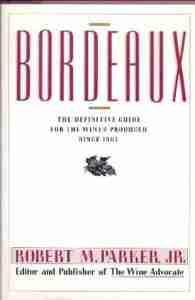 “Bordeaux” was just what we needed as a reference text to refine our knowledge. Our experience had given us a foundation Mr. Parker would show us how to build our own chateau upon it. We could try the wines he wrote about and compare what we experienced with what he said he felt. We all came to love the style of wines from certain Chateaus he seemed less enthused about and vice versa. What we were gaining was our own personal critical perspective. It has provided a lifetime of pleasure for all three of us I believe. 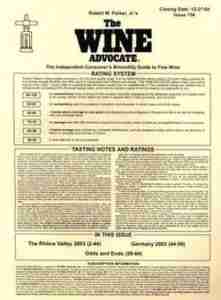 Mr. Parker’s influence rose rapidly along with the subscribers to The Wine Advocate. He would become a champion of non-European wines. I know one of my favorite moments was tasting a Shiraz wine from Australia while thinking this is amazing for $6/bottle. Only to find in the next issue that Mr. Parker was writing about them, too. It is one of those times where I felt I had learned some of what he had to teach me. Whenever I try wines from a new region in the world I approach with an open mind because I have been rewarded most of the time.

There was a backlash to Mr. Parker by some who felt he had too large an influence on the wine-buying public with his ratings. That always felt like a false narrative to me. I followed his writing because he pointed me to wine I enjoyed. That was always the most important piece of Mr. Parker to me that wine was here to enjoy.

Which leads to my favorite story of my personal interaction with him. A local restaurant was having a wine tasting event with Mr. Parker in attendance. I couldn’t buy a ticket fast enough. It was a small affair and he spent time with each table taking questions and talking about what we were drinking. Someone who was less starstruck than I asked him if he ever visited any of his reader’s wine collections. He then told a story about being invited by a reader who he knew had an extensive collection to dinner. He was surprised when the hosts served younger wines. After the meal was done, he asked when they drank some of the wines in the cases around them. The host replied, “Never! We’re saving them!” Mr. Parker looked around our table and said to us “don’t do that, the joy of wine is in drinking it.” It is those words which have stuck with me.

For me part of the way I write about perfume was directly affected by the way Mr. Parker approached wine. I try to approach every new fragrance with the same open mind he encouraged me to have about wine. I am always pleased when I find a new brand that I like because of it.