One of the series I discovered during quarantine is “The Crown”. It is streaming on Netflix telling the story of Queen Elizabeth II. The earlier seasons have covered her early days from 1947 moving a few years at a time in each successive set of episodes. The early seasons were that kind of historical narrative which was fascinating to watch. Creator and writer Peter Morgan does an entertaining job of filling in the blank spaces between the historical events we can see. The first three seasons took us up to 1977. This most recent season has been the most controversial because it covers a time when the British monarchy was much more visible. It also involves historical figures who have been well-covered as the media landscape changed during these years, too.

Season 4 covers the eleven years Margaret Thatcher was Prime Minister, 1979-1990. Gillian Anderson plays Mrs. Thatcher subsuming herself under hair, make-up, and an uncanny imitation of her speaking style. Olivia Colman returns as Queen Elizabeth. Much of the season concerns a world where women were taking on more power as personified by these two. The actresses capture the prickly relationship between the two. 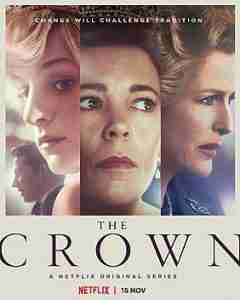 The other big part of this time was the courtship and marriage of Prince Charles and Princes Diana. This is the part of the show where Mr. Morgan does a lot of extrapolating to fill in the blanks between public knowledge. It is the part of the show which has caused the most controversy because it is hard not to watch “The Crown” without thinking you are watching something more authentic than it is. This is especially true in the fractured fairy tale that is Charles and Diana. Josh O’Connor and Emma Corrin play their parts brilliantly. Which might be why they have an outsized impact. Even though the blank spaces come from the pen of Mr. Morgan they seem plausible.

My favorite episode of the season is the fourth one titles “Favourites”. Ms. Thatcher’s son has gone missing while racing the Paris-Dakar Rally. She is distraught because he is her favorite child. Throughout the episode it is made clear that his twin sister is second best in their mother’s eyes. The Queen is surprised to hear a mother has a favorite child until Prince Philip tells her that she does have one. The Queen spends one-on-one time with each of her children to try and figure it out. This part shows all four of the Royal children are having their issues which the Queen has been unaware of. This shared experience between the two political protagonists of this season helps to give them a humanity beyond what their public personas presented.

This dynamic runs through the entire season as it ends with Mrs. Thatcher losing her position while Charles and Diana are on the verge of divorce. I am looking forward to the next season because that also should cover an equally tumultuous time. Even though it is pure speculation I am looking forward to what Mr. Morgan fills the blanks in with.