There is a saying that says, “you should never meet your childhood heroes.” The idea behind that is that what you perceived with childlike affection will wither in the sunlight of maturity. There are many people who I would put on a list of childhood heroes which upon learning more about their life some of the adulation wore off. Near the top would be Stan Lee the man who created the Marvel superhero universe. He just passed away earlier this week and it has taken me a few days to process my feelings about my childhood hero. 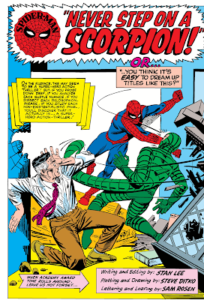 I’ll start with the childhood hero part. My father read comic books and his favorites were the DC heroes of Batman and Superman. As his son I read them, but I wasn’t as excited about them. On my sixth birthday I was given my first allowance; $2.00. I had looked at the rotating wire rack of comic books before and was curious about this “Spider-Man”. The issue that was on sale was #29 where Spider-Man battles with The Scorpion. Right there on the splash page were the names of two men who would influence my entire life through their creation; Stan Lee and Steve Ditko. They created Spider-Man and they created an entirely different style of storytelling. Their characters lived in the world I lived in. They had some of the same day-to-day problems I had. They just had to use their special powers for good. The credo given to Peter Parker by his Uncle Ben, “with great power comes great responsibility.” Is true whether it comes from a radioactive spider or something lest fantastical. This is what created my enduring love for stories told in comic book format.

Over time as I became more immersed in the comic book community, I began to hear that Mr. Lee was not the one responsible for the creation of the Marvel Universe. It was the artists; Steve Ditko on Spider-Man and Jack Kirby on Fantastic Four who were the real creative minds and Mr. Lee was taking undue credit. In these pre-Internet days it was through going to comic book conventions that I would interact with the people who made my favorite comic books. It was also in those days when I could sit down with them and have them tell me their story of working in the comics. At least from the artists point of view Mr. Lee took more credit than he should have. It led to times when Mr. Ditko and Mr. Kirby would stop working for Marvel only to return. What I was able to piece together as a reader was that Mr. Lee did provide something special to the story he was taking credit for. When Mr. Ditko or Mr. Kirby were on their own the art was still vibrant, but the story was less so. What I believe now is the Marvel Universe needed all three of them to come to life.

Back to the childhood hero part. As a kid there were things I liked others tried to make me feel bad for. That I had stacks of comics in my bedroom was pointed out in a derisive way many times by my friends and family. I was asked constantly, “when are you going to stop reading those funny books?” The answer is not yet. One of the things which made me even more attached to them was a column that was in every month’s issues of Marvel comics called “Stan’s Soapbox”. In a little yellow box Mr. Lee told me I was part of a large community of people who read comic books. He called me “true believer” and he encouraged me in his signature of “Excelsior!”. Even though I was the only one of my friends who read comic books; once a month I was told I was not alone. It is a powerful thing. It was the community of the Internet decades before it existed. Mr. Lee used his monthly Soapbox to speak out about things like racism. The column below came out in December of 1968. Mr. Lee created a Marvel community which stood for something more than just selling funny books.

For the final phase of my remembrance it was the joy that was evident in his cameos in the movies which make up the Marvel cinematic universe. If there was a Marvel logo which preceded the movie you knew that somewhere in the movie Mr. Lee would show up with a one-liner. I guess we have director Bryan Singer who cast him as a by-stander on the beach in the first X-Men movie to thank for that. I remember being in the theater and giggling delightedly. I still giggle whenever he shows up. Although when I see his final cameo sometime next year, I think it will be a more wistful smile which greets that one.

Thank you, Stan for a lifetime of stories.