In doing seven years of these Christmas inspired columns during December I’ve left out one form of Holiday cheer. The fictional story set during the Season. It was one of the readers of this column who pointed it out to me last year. She asked me, “Don’t you have any favorite Christmas stories?”. I am a fan of many of the classics and I will read “The Tailor of Gloucester” by Beatrix Potter, O. Henry’s “The Gift of the Magi” and Chris Van Allsburgh’s “The Polar Express”. Those are well-known Holiday stories. There is one I also read most every year which might not be as storied, “Skipping Christmas” by John Grisham.

The reason I have a copy at all is its own Christmas story. My nephew is a pilot and back in 2001 when this came out, he was flying for a private jet company. His client at the end of the year was author John Grisham who was out promoting “Skipping Christmas”. My nephew got him to autograph some copies and handed them out on Christmas morning. 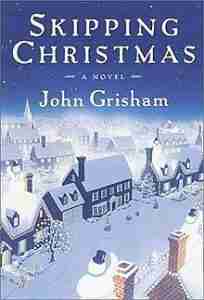 Mr. Grisham is not one of my favorite authors, so I wasn’t in a hurry to read it. In fact it wasn’t until a year later when I noticed it on the shelf with all the Christmas books that I even thought of it again. It was short enough that it felt like an evening’s reading time would see me through. By the time I closed the book I realized it was going to be on my perennial Holiday reading list.

It tells the story of the first empty nest Christmas for Luther and Nora Krank. They are finding it hard to drum up the spirit with their daughter gone. When Luther calculates how much they spend on their Holiday stuff he believes there is little to show for the money spent. After Nora insists, they still make the same charitable donations they always have she agrees to skip Christmas. They decide to put the money into a trip that leaves on the day after.

For the rest of the book it is a riff on the “It’s A Wonderful Life” what would things be like if I weren’t here. Except in this case the people who the Kranks have affected over the years let them know they don’t like their idea of skipping Christmas, not one little bit. It is all played for broadly comic effect. Until events cause the Kranks to reconsider what Christmas means.

While I may not enjoy his typical legal thrillers Mr. Grisham is an excellent writer. He shows a deft comic touch throughout the book. I may not spend time in the courtroom with him, but we spend a little time every Christmas together.

Disclosure: This book was received as a family gift.