As we have covered multiple times through this series some perfumes have a shelf life. Not due to their materials going bad. But because trends shift away from them. One of the more frustrating parts of looking back is when a really great version of a style which is in its final days puts out one of its best examples. That is the story of Sikkim de Lancome.

Lancome has been producing perfume since 1935. They have consistently been in front of trends instead of following them. 1969’s O de Lancome, 1971’s Magie Noire or 1990’s Tresor. Especially the latter made a name for the brand. One of the earliest releases was Cuir de Lancome. This was a traditional birch tar cuir de Russie style of leather. In the 1930’s this was the trend. By the late 1950’s early 60’s leather chypres had become the rage. Somewhere inside the creative team at Lancome the decision was made to join in.

Fresh off composing O de Lancome perfumer Robert Gonnon was asked to make one for the brand. He would design one of the driest leather chypres ever. He would also hit the market too late as it released in 1971. The sun was setting on that style, rapidly.

It is that arid intense green quality which sets Sikkim apart from its contemporaries. The general style was for florals and/or stone fruits to add some softness to the animalic chypre foundation. It was thought to make them easier to wear. M. Gonnon was going to go the other direction with very dry top and base with only a bit of floral relief in the middle. 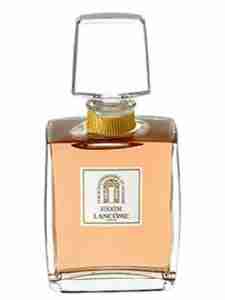 The opening is a severely green galbanum. Sikkim is one of the perfumes which made me adore this ingredient in high amounts. M. Gonnon adds aldehydes which orbit the crystalline galbanum like fizzy comets. There is an herbal component which is listed as artemisia but if it is it is one of the driest versions of that ingredient. Whatever is present adds a dusting of green herbal dust to the shiny galbanum. It moves to an abstract gardenia heart accord. M. Gonnon does not want the inherent green of actual gardenia to interfere with his galbanum. To anyone smelling this it is gardenia just a sweeter deconstructed one. We then come to the leather chypre base. M. Gonnon moves everything to the dry side of the spectrum. The leather feels skanky, old, and crackly. The chypre accord vibrates off the herbal galbanum. Together it forms an excessively sharp experience.

Sikkim in its original formulation has 14-16 hour longevity and above average sillage.

Sikkim in its 2005 re-released version has 10-12 hour longevity and average silllage.

Sikkim was originally discontinued within ten years. It would rise again as part of Lancome’s 70th anniversary as part of “La Collection”. That version was hampered by being unable to use some of the ingredients of the original. I’m not sure who oversaw it, but they did a creditable job at retaining the desiccated greenness in a slightly different way. If you can only find the reformulated version, it still hews to many of the themes M. Gonnon expressed in the original.

I think Sikkim de Lancome is right up there with the greatest of the leather chypres. It is just too bad it came too late for others to decide that for themselves putting it in the Dead letter Office.

Disclosure: This review is based on bottles of the vintage and reformulated versions I purchased.