This week saw the end of two television series. One was The Late Show with David Letterman and the other was Mad Men. David Letterman had been the man who took the late-night talk show and changed it up. Mad Men was this perfect time capsule of America as it grew up during the 1960’s as seen through an advertising executive. When both started out they were the new cool thing. Then they both lived long enough to become perennials without the buzz. When I think of perfume I usually don’t think of it in those terms. There are great perfumes and they have continued to last attaining their own kind of persistent classicism. This past weekend at Sniffapalooza Spring Fling Michael Edwards, who I consider to be the perfume equivalent of the Navajo wisdom keeper, reminded me of a perfume which changed everything back in 1973. That perfume was Charlie by Revlon.

As Mr. Edwards recounted prior to 1973 the great majority of perfume was purchased by men for the women in their life. As women entered the workplace and began to find their economic footing Revlon wanted to make a perfume to appeal to that demographic. In 1973 Charlie was released, it was composed by perfumer Francis Camail. M. Camail composed a floral-aldehyde perfume but one not nearly as heavy, or “old lady”, as other prominent floral–aldehydes. Revlon was aggressively hoping to attract the 20-something liberated woman. They were also hoping to create an entire lifestyle brand to cater to that demographic. The approach to this produced one of the classic television commercials of all time.

The television commercial showed this blond statuesque woman getting out of a Rolls Royce in a gold silk pantsuit. As she walks into the bar it is clear she is known by all of the men she encounters. The catchy jingle was sung by lounge singer extraordinaire Bobby Short. If there was an ideal for a liberated woman to try and emulate here it was. A woman exalting her freedom with a laugh.

This worked spectacularly well as within three years Charlie was the best-selling perfume in the world. Revlon had done exactly what they wanted. They had created a new demographic of consumer pointed towards buying their products. The men were no longer going to be the ones who made the fragrance purchases anymore. 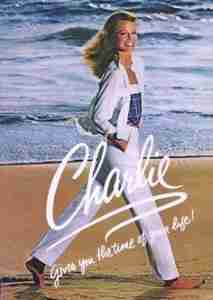 Every time Mr. Edwards reminds me of the influence Charlie had it makes me all the more surprised it hasn’t really lasted as other perfumes from that era have. Now it is found on the back shelf of your local drug store. Forgotten, probably collecting dust. It is like the women who made Charlie so successful; once opened up to the world of buying their own perfume found something they liked better. It reminds me of that last shot of Don Draper from Mad Men embracing the societal changes but finding a way to leverage them into an advertising angle. Charlie is the story of how Revlon changed the entire sociology of perfume and like Mad Men and David Letterman has now retired to be fondly remembered but not contemporaneously used.