One of the fun things about geek culture is when someone re-imagines that which has been known for years into something entirely different and contemporary. When I was at 2013 New York Comic-Con I was standing in line for something on the show floor and next to where I was there was a booth for Archie Comics and prominently displayed was something called “Afterlife With Archie”. Behind the table was the man who wrote the comic, Roberto Aguirre-Sacasa. We chatted a bit and I bought a copy because Mr. Aguirre-Sacasa’s enthusiasm sold me. One of the things which drew me in was this was a writer who also was inspired by the old classic horror comics. We talked about our favorites which was what really made me buy a copy. Those influences are evident as Mr. Aguirre-Sacasa takes the cast of Archie Comics and drops them into a zombie apocalypse. Mr. Sacasa- Aguirre loves these characters and enjoys giving them a different set of challenges to deal with. Flesh-eating fiends versus plucky teens with dark pasts. It worked so very well. It worked so well that Mr. Aguirre-Sacasa was asked to move from the comic page to the video screen. After a few fits and starts what was once going to be a movie is now a new television series on The CW network called Riverdale. 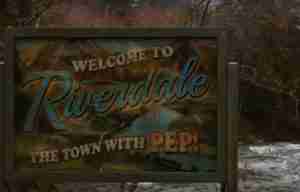 Mr. Aguirre-Sacasa is not imagining the Archie gang as being chased by zombies for Riverdale. Instead he is doing a mash-up of Archie Comics plus Twin Peaks plus One Tree Hill. If you have any doubts about the middle influence confirmation comes when you see the “Welcome to Riverdale” sign at the beginning of the first episode. It is a replica of the “Welcome to Twin Peaks” sign. The overarching plot of Riverdale is also a parallel to Twin Peaks as the central question at least early on is “Who killed Jason Blossom?” Mr. Aguirre-Sacasa has once again deftly woven disparate inspirations into a story all its own. 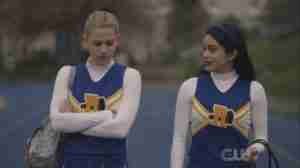 While the mystery exposes a dark side to our well-known characters it also allows them to live up to their original design. As much as Archie is the name on the logo for Riverdale it is the dynamic between Betty and Veronica which has kept me most interested through the early episodes. Betty, portrayed by actress Lili Reinhart, is still perfect and still pining for Archie except there is also something less wholesome bubbling beneath the perfection. Ms. Reinhart does a nice job at showing that in the first episode when she is in the midst of being insulted and she clenches her fist so hard that she draws blood. I suspect her character has some unseen, less perfect, layers yet to be seen. Veronica, portrayed by actress Camila Mendes, is the rich girl brought low by something criminal her father has done causing her mother to return to Riverdale from NYC. Veronica is the mean girl looking for a fresh start as she joins the middle-class. Mr. Aguirre-Sacasa gives them a lot to do which is good because, so far, they are the primary reason to tune in.

Based on everything Mr. Aguirre-Sacasa has done with these characters in the past I expect the remaining episodes to be full of surprises. I am going to be there all the way.