If there was a red-headed stepchild to the great Cola Wars it was RC Cola. RC stands for Royal Crown but hardly anyone uses that. When I was a child in the 1960’s RC was as prevalent as Coke or Pepsi. In those days I had preferences based on the food I ate them with. Coke was the choice for a hamburger or a hot dog. Pepsi and pizza were perfect. For RC it was peanut butter and jelly sandwiches. 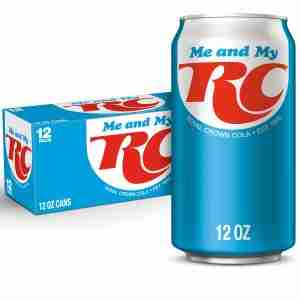 RC began its life in the early 20th century as the creation of a store owner who felt Coca-Cola wasn’t giving him a fair shake. He decided to develop his own syrup. RC would command a nearly equivalent number of sales through the 60’s. I was as likely to be offered a can of any of the three when visiting my friends’ houses.

If I was going to describe the taste it was not as sweet as Pepsi but sweeter than Coke. Which says something about the food I want to drink it with I guess.

Once the 70’s began there was an advertising war between Pepsi and Coke which was dubbed the Cola Wars. It would go on for thirty years before an uneasy truce was declared. It was fought in high profile commercials across the television era when you couldn’t fast forward through the ads. I found myself immune to it all. Which one I drank was down to what I was eating it with. It wasn’t “red is for beef white is for fish” level but I had my own pairings.

A consequence of Coke and Pepsi slugging it out was that RC found their shelf space in the market getting shrunk down. I only found they were still on sale when I was at my local store and saw them delivering cases. I walked back to the soda aisle to find it on the bottom shelf. I asked the store manager how it sold. She told me they sell a fair amount of it. Now that I know it is there, I’ll be one of those customers.